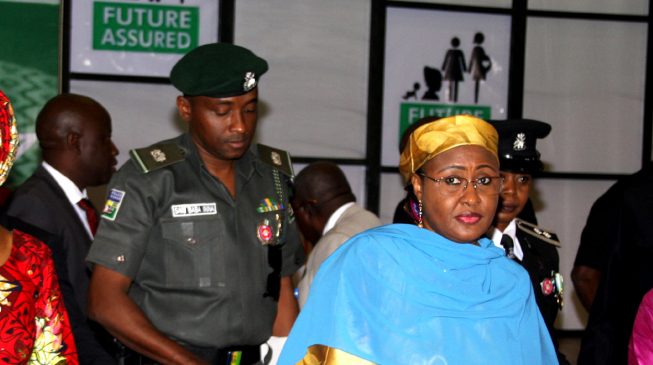 The Peoples Democratic Party has asked President Muhammadu Buhari to explain the source of funding of the office of the first day being occupied by Aisha, his wife.
In a statement on Thursday, the party also asked Buhari to explain the rationale behind the office despite his promise to scrap it.
ADVERTISEMENT
The party said the current administration is “extremely expensive” and urged the president to cut down cost of governance within the presidency and not through “cosmetic” means.
The party was reacting to new directives issued to senior government officials by the president including slashing of their estacodes.
Kola Ologbondiyan, PDP spokesman, said while Buhari claims to reduce cost of governance, the presidency drains Nigeria’s valuable resources.
Ologbondiyan said: “While the PDP is still monitoring the implementation of directive to government functionaries on cost cut, the party tasks President Buhari to take the first step by immediately fulfilling his promise to reduce the Presidential fleet, as well as cut his over-bloated entourages and curtail the opulent lifestyle in the Presidency, which is daily flaunted before suffering and impoverished Nigerians.
“We invite Nigerians to note that the Buhari Presidency has proven to be extremely expensive and a major draining pipe for valuable resources, while millions of compatriots, who look up to government for solutions, wallow in hunger and acute poverty.
“The profligacy that permeates the Buhari Presidency had further manifested in the public fight between the First Lady, Aisha Buhari, and President Buhari’s nephews over issues of opulent accommodation in our presidential villa.”
The president recently approved the appointments of six aides for the office of the first lady.
The main opposition party also accused the president of failing to disclose the details of the presidency’s budget “despite demands by our party and other well-meaning groups in Nigeria.”
“The failure to make the details of the Presidency budget public places a huge burden on the Buhari Presidency, particularly in the face of allegations of budgetary corruption and financial sleaze,” it said.
ADVERTISEMENT
“Unless the Presidency budget is made public for Nigerians to see, any directive on cost cut remains cosmetic.”