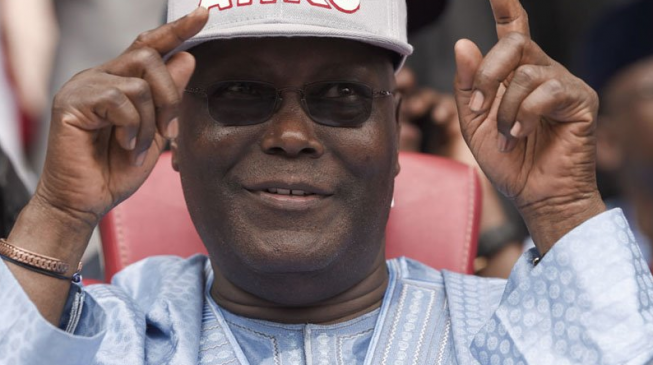 A caucus of the Peoples Democratic Party (PDP) in the house of representatives says Mary Odili, Slyvester Ngwuta, Bode Rhodes-Vivour and three other senior justices of the supreme court must be appointed to hear the appeal of Atiku Abubakar.
Atiku, PDP presidential candidate in the last election, had filed an appeal at the apex court to challenge President Muhammadu Buhari’s victory at the election petition tribunal.
ADVERTISEMENT
It is a tradition at the supreme court for senior justices, including the chief justice of Nigeria, to preside over presidential election appeals.
Odili, a senior justice, is the wife of Peter Odili, former Rivers state governor and founding member of the PDP.
Rhodes-Vivour, another senior justice, is the father of Gbadebo, who ran for Lagos west senatorial seat on the platform of the PDP in the last election.
Ngwuta, a senior justice, resumed duties at the supreme court in September after being prosecuted for alleged corruption by the Buhari administration.
In a statement signed by Kingsley Chinda, PDP leader in the house, the caucus said Nigeria has set the precedent of appointing the most senior justices to hear presidential election appeals since 1979.
“The hearing of the appeal on the decision of the Presidential Election Petition filed by Alhaji Abubakar Atiku and our great party, the People’s Democratic Party, (PDP), begins a few weeks at the Supreme Court,” it said.
“The practice of selecting Justices to hear the appeal is expected to precede the hearing, going by age-long convention. What isn’t conventional is the present attempt to influence Chief Justice Ibrahim Tanko, going by reports in the media, to subvert the age-long and time-tested practice, precedent and convention of selecting the most senior Justices of the Supreme Court to hear the presidential election appeal.
“Chief Justices of Nigeria through time have never in the selection of the Supreme Court’s Election Petition Appeal Panel surrendered to the phoney dictates of the ruling parties.
“We are proud to state here that never in our great party’s time in power, did it or its personages, dictate selection of panel members to Chief Justices; NEVER.
“In 2008 when President Buhari, defeated by late President Umaru Yar’Adua, appealed the decision of the Presidential Election Petition Tribunal, the then Chief Justice, Legbo Kutigi, empaneled Justices Katsina-Alu, Aloma Mukhtar, Dahiru Musdapha, Walter Onnoghen, George Oguntade and Niki Tobi to hear the appeal that year.
“He was never dictated to, nor was any attempt made by our great party to influence CJN Justice Legbo Kutigi, who stuck to a conventional practice that consistently secured the seal of approval of past Chief Justices: CJN Fatai Williams, 1979; CJN George Sowewimo, 1983; and CJN Muhammad Uwais, 2003.
“CJN Katsina-Alu also followed CJN Kutigi’s steps in 2011 and kept to the age-long conventional practice. If there is any arm of government that regards precedents and practices as almost sacrosanct, it is the judiciary. Nigerian Judiciary cannot reverse that internationally accepted practice of stare decisis just to please A.P.C government and serve the interest of a select individual or group.
“Selecting the Supreme Court Panel isn’t about witch-pricking-pricking Justices who suck blood out of justice isn’t about going outside the order of seniority to select Justices, witch-prickers, without independent jurisprudential thoughts and whose singular attribute for selection is that they demonstrate permanent dislike for justice and passion for doing the bidding of power.
“Surely, selection, Shorn off pressure and influence of the government and the present ruling party, is about demonstrating and holding firm to the constitutional powers of the Supreme Court to conduct its own affairs and not succumb to pervasive power and corrosive external influences.
“To sidestep precedents and convention is to provide legitimacy to the ruling party whose stock-in-trade is ridiculing the judiciary. Chief Justice Ibrahim Tanko must Sticks to precedents and conventions to preserve the integrity of the courts as the last hope of the common man and of citizens of our great country.
ADVERTISEMENT
“We are however, gladdened that on Monday 14th October, 2019 through its Director, Press and Information, Dr. Festus Akande, the Supreme Court refuted this intent and reassured the Nigerian public that it is out to “Serve the interest of the generality of the Nigerian masses and not select individuals or groups”. We therefore, pray and hope that the Supreme Court does not allow itself to fall into this gobble trap.
“We wish to state that selection of Justices to hear the appeal of our great party’s presidential candidate, Alhaji Abubakar Atiku, must be in accordance with the conventional practice admitting only of the selection of the first seven most senior Justices of the Supreme Court: CJN Ibrahim Tanko, Justice Rhodes-Vivour, Justice Mary Odili, Justice Sylvester Ngwuta, Justice Olukayode Ariwoola, Justice Musa Muhammad and Justice Kumai Akaahs. NO MORE.”