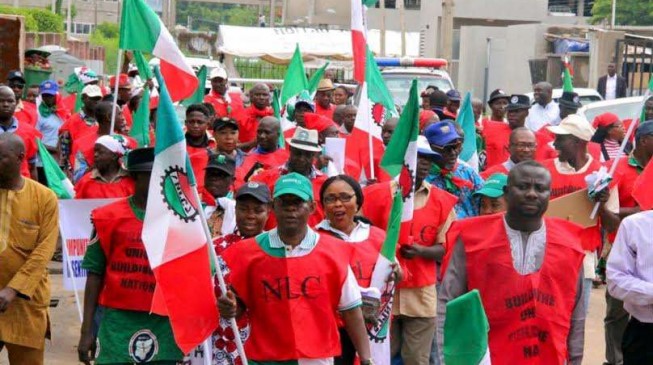 The Nigeria Labour Congress (NLC) has directed its state councils to prepare for an indefinite strike on October 16 if the federal government fails to meet its demand.
The new minimum wage of N30,000 has not been implemented because the government and labour unions have failed to reach an agreement on the consequential adjustment of salaries.
ADVERTISEMENT
The organised labour had demanded 29 percent salary increase for officers on salary level 07 to 14 and 24 percent adjustment for officers on salary grade level 15 to 17.
However, the government presented a proposal of 11 percent salary increase for officers on grade level 07 to 14 and 6.5 percent adjustment for workers of grade level 15 to 17.
In a circular by Emmanuel Ugboaja, NLC general secretary, the union said the action should be embarked on if the proposed negotiation slated for October 15 with the government is unsuccessful.
‘You will recall that a joint communiqué was issued by the leadership of the NLC, Trade Union Congress and the Joint Public Service Negotiating Council stating that after two weeks from the date of the said communiqué, industrial harmony could not be guaranteed in the country should an agreement not be reached with the Federal Government on the consequential adjustment of salaries as a result of the new minimum wage of N30,000,” the communique read.
ADVERTISEMENT
“You are hereby directed to coordinate preparations with TUC and JPSNC in your state for necessary industrial action should the time expire without an agreement as contained in the communiqué.”