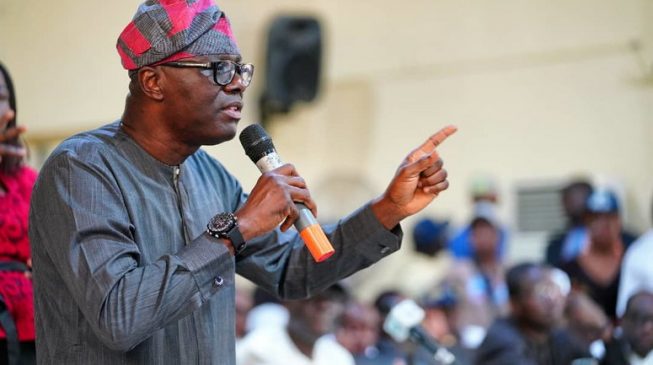 Babajide Sanwo-Olu, governor of Lagos state, has urged more residents to pay their taxes to enable the state government to carry out its developmental projects.
Sanwo-Olu gave the advice on Tuesday while answering questions on ‘The Platform Nigeria’, an event organised by The Covenant Christian Church Place, Iganmu, Lagos.
ADVERTISEMENT
According to the governor, less than 700,000 out of 4.5 million taxable adults in Lagos are currently paying tax.
“We are not saying that we should increase tax, but we encourage people to be on the tax net,” he said.
“We are also appealing to our tax agency to be more proactive and reach out to people who are not paying tax.”
Sanwo-Olu appealed to Lagosians to be patient over the bad state of roads in the state, saying that continuous rainfall was slowing down rehabilitation and palliative work on the roads.
He assured that there would be extensive and massive rehabilitation of roads after the rainy season.
The governor said that state government was working on a multi-modal transportation system comprising rail, water transportation and bus transit system to remedy the traffic problem in the state.
”On water transportation, we are encouraging the building of a lot of jetties and we have just acquired six to seven new passenger boats that can take 60 to 70 passengers at a time,” he said.
On commercial motor-cycle operators, the governor said since his administration wanted to give everybody a chance to be part of the state development plan, he was trying to harmonise and come up with a regulation system.
”This is designed to know who they are, their activities and how to manage them to ensure that they don’t add to the problem of traffic flow in the state; we don’t want to disenfranchise anybody,” Sanwo-Olu said.
He said that through the ongoing Metropolitan Fibre Initiative of his administration, public institutions in the state, such as schools and hospitals, would have access to high-speed internet service.
ADVERTISEMENT
Sanwo-Olu said that the initiative, which was technology enabler, would help to manage traffic and other security issues in the state.