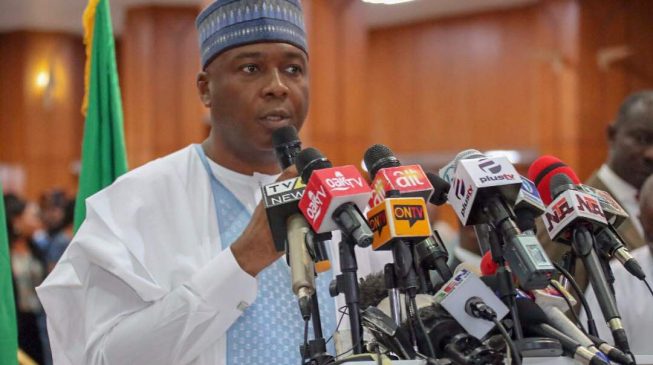 Bukola Saraki, former senate president, says the court which granted a temporary forfeiture order on his houses in Ikoyi was misled.
A federal high court sitting in Lagos had ordered the temporary forfeiture of two properties of Saraki in the Ikoyi area of  Lagos state following an ex-parte application by the Economic and Financial Crimes Commission (EFCC).
ADVERTISEMENT
But speaking through Yusuph Olaniyonu, his media aide, Saraki said neither him nor his lawyers were aware of any application by the EFCC for any forfeiture order.
He said a federal high court in Abuja had earlier given an order restraining the EFCC from taking action on the property, as it is a subject matter where the anti-graft agency and the ministry of justice were parties.
“We are sure the FHC judge in Lagos was not aware of all these facts and has therefore been misled into giving the temporary forfeiture order. The affected property, House Number 17 A and 17B, was specifically listed in the case against him at the Code of Conduct Tribunal in which the EFCC was part of the prosecution and the case went up to the Supreme Court where the apex court in its July 6, 2018 judgement ruled in his favour,” he said in a statement.
“The Supreme Court has ruled that the source of funds for the purchase of the property was not illicit as claimed by the prosecution. On pages 12, 13 and 26 of the judgement of the highest court, this particular property on 17A McDonald Street, Ikoyi, was specifically referred to and the court upheld the no case submission of Dr. Saraki and therefore ruled in his favour.”
Olaniyonu urged supporters of Saraki to remain calm while the case is resolved.
“We know that any action which tends to mislead the court amounts to misrepresentation and it is a good ground for us to get the Court to throw away the order it issued today. We are sure the order will be reversed,” he said.
“We therefore call on all the friends, associates and supporters of Dr. Saraki to remain calm because we know this action will not stand when the court gets to hear the side of the former Senate President.”
ADVERTISEMENT
The Kwara state house of assembly is curremtly investigating an alleged transfer of the ownership of a four-bedroom chalet to Saraki.