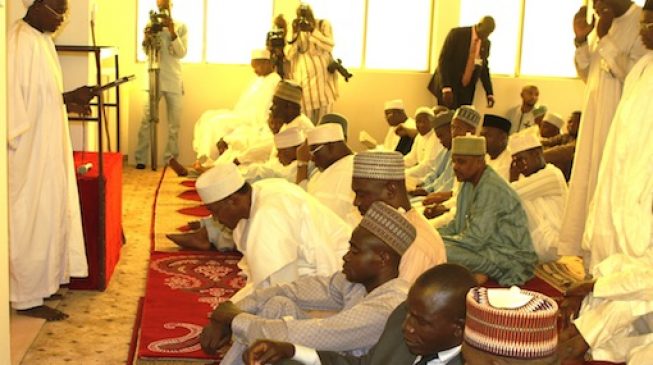 President Muhammadu Buhari and hundreds of Muslims on Friday observed the weekly two raka’at prayer at the Aso Rock Mosque, Abuja.
Presidential aides, some cabinet ministers and Abdulaziz Yari, former governor of Zamfara state, were among the personalities at the mosque.
ADVERTISEMENT
According to NAN, a seemingly unprecedented number of faithful prayed at the mosque on Friday.
“In what appeared an attempt by some curious worshippers to confirm the veracity of social media allegation of Buhari’s taking a second wife,” NAN said in its report.
On October 10, social media was abuzz with stories of Buhari getting set to marry Sadiya Umar Farouq, minister of humanitarian affairs, disaster management and social development.
The post, which went viral, had October 11 as the wedding date.
However, Buhari only exchanged pleasantries with citizens after the prayer session.
NAN said some of the worshippers condemned those behind the fake news, calling on well-meaning citizens to always shun unverified social media reports.
ADVERTISEMENT
The minister mentioned in the fake marriage is currently overseas on official assignment.

Editor’s note: This picture was used for illustrative purposes