What to Know About the House Vote on Trump Impeachment Rules 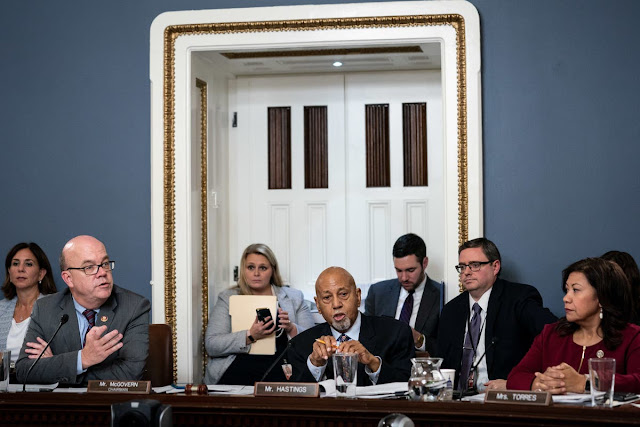 What the vote is on

The vote is on a resolution that would set rules for the public phase of an impeachment inquiry that has so far been conducted exclusively behind closed doors. It would authorize the House Intelligence Committee — the panel that has been leading the investigation and conducting private depositions — to convene public hearings and produce a report that will guide the Judiciary Committee as it considers whether to draft articles of impeachment against President Trump.
ADVERTISEMENT
The measure would also give the president rights in the Judiciary Committee, allowing his lawyers to participate in hearings and giving Republicans the chance to request subpoenas for witnesses and documents. But the White House says it still does not provide “basic due process rights,” and Republicans complain that their ability to issue subpoenas is limited. They would need the consent of Democrats, or a vote of a majority of members. That has been standard in previous modern impeachments. The majority has the final say over how the proceedings unfold.

What it all means

The vote will be the first time the full House has gone on the record on the impeachment inquiry since Democrats announced last month that they were starting their investigation into Mr. Trump’s dealings with Ukraine. And while it is not a formal vote to open impeachment proceedings, it is all but certain to be seen as a measure of approval or disapproval for the process.
Republicans have been demanding a formal vote to authorize the impeachment inquiry, as was done in the case of President Bill Clinton, who was impeached in the House but acquitted by the Senate, and President Richard M. Nixon, who resigned rather than face impeachment. The Constitution does not require an authorization vote, nor do House rules require it, and Democrats have repeatedly said an authorization vote is not necessary.

But Thursday’s vote indicates that Democrats, once wary of holding a vote on the issue, have now united solidly behind the idea. They believe it adds an air of legitimacy to the inquiry and gives them practical tools they will need to effectively — and quickly — make their case to the public. It is also meant to call the bluff of Republicans who have been arguing for weeks that the process lacks legitimacy because the full House hasn’t voted on it.
ADVERTISEMENT
At the same time, there are risks for Democrats. A highly partisan vote could buttress Republican arguments that the inquiry is a purely political exercise aimed solely at overturning the 2016 election.