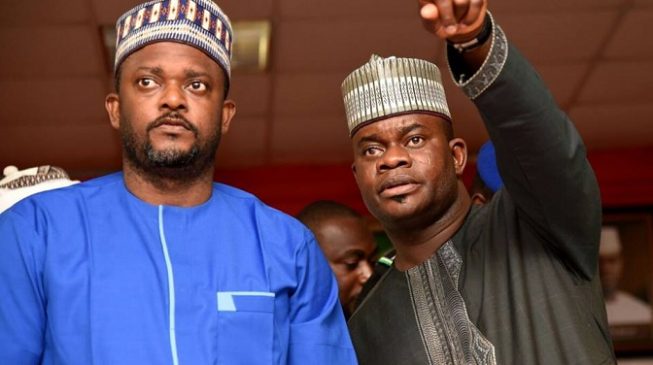 Yahaya Bello, governor of Kogi state, has nominated Edward Onoja, his running mate in the November 16 election, as deputy governor of the state.
Sources told TheCable that the governor has sent the name of Onoja to the state assembly for confirmation.
ADVERTISEMENT
The development comes a few hours after the Kogi state house of assembly removed Simon Achuba over alleged gross misconduct.
Achuba had fallen out with the governor shortly after he was sworn into office.
Onoja would be sworn into office on Saturday, according to NAN.
An ally of Bello, Onoja is the most influential member of the governor’s cabinet. Their relationship predates the emergence of Bello in 2016.
Aged 44, the indigene of Emonyoku Ogugu in Olamaboro local government area of Kogi, is a Geologist.
He sought the ticket of the former All Nigeria Peoples Party (ANPP) for a house of assembly seat in 2011.
He was the chief strategist of “Yahaya Bello Campaign Organization” in 2015 and the state director of the Kogi Youth Arise Group, which worked for the success of President Muhammadu Buhari, still in 2015.
ADVERTISEMENT
He formally resigned as chief staff two days ago while Abdulkareem Jamiu, a pharmacist, was appointed to replace him.