‘You are a liar’ — Jonathan fires back at David Cameron 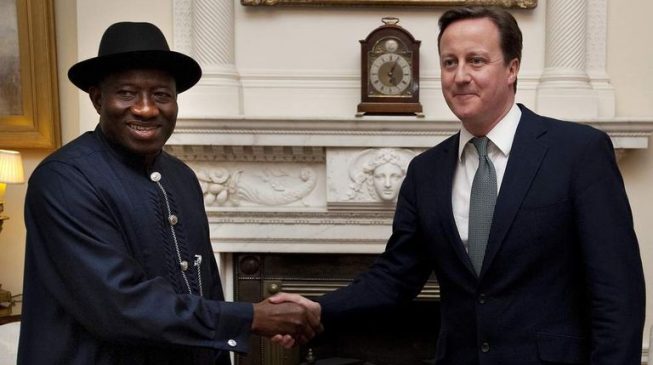 Ex-President Goodluck Jonathan has asked the public to take the claim in “For The Record”, the memoir of David Cameron, former UK prime minister, with “a grain of salt”.
In the book, Cameron had said some British troops spotted the location of the abducted Chibok girls and offered to help in rescuing them but Jonathan refused.
ADVERTISEMENT
Nigeria's credible online independent newspaper, TheCable,  had earlier contacted Jonathan to react to the claim but Ikechukwu Eze, spokesman of the former president, had not responded as of the time a report on Cameron’s book was filed.
But in a response Eze sent to TheCable on Saturday afternoon, Jonathan said he is not the first to accuse Cameroon of lying in the book and he would not be the last.
“I read the comments by former British Prime Minister, David Cameron, in his new book, For the Record, in which he accused me and the Nigerian Government, which I headed, of corruption and rejecting the help of the British Government in rescuing the Chibok Girls, who were kidnapped on April 14, 2014,” he said.
“It is quite sad that Mr. Cameron would say this because nothing of such ever occurred. As President of Nigeria, I not only wrote letters to then Prime Minister David Cameron, I also wrote to the then US President, Barrack Obama, and the then French President, François Hollande, as well as the Israeli Prime Minister, Benjamin Netanyahu, appealing to them for help in rescuing the Chibok Girls.
“How could I write to appeal for help and then reject the very thing I appealed for?
“Also, history contradicts Mr. Cameron. On March 8, 2012, when the same Boko Haram linked terrorists abducted a British expatriate named Chris McManus, along with an Italian hostage Franco Lamolinara, in Sokoto, I, as Nigerian President, personally authorised a rescue effort by members of the British military Special Boat Service supported by officers and men of the Nigerian Army, to free the abducted men.
“So, having set a precedent like that, why would I reject British help in rescuing the Chibok Girls, if it was offered?
I also authorised the secret deployment of troops from the United Kingdom, the United States and Israel as a result of the Chibok incident, so how Mr. Cameron could say this with a straight face beats me.
“I would urge the public to take Mr. Cameron’s accusations with a grain of salt. I will not be the first person to accuse him of lying on account of this book, and with the reactions in the UK so far, I definitely will not be the last.”
Jonathan said the government of Theresa May, Cameron’s successor, had once exposed alleged lies the author of For The Record told about the Chibok abduction.
He said Cameron did not reach him over the Chibok kidnap, adding that he was the one who wrote to him to seek intervention.
“Moreover, on March 8, 2017, the British Government of former Prime Minister, Theresa May, in a widely circulated press statement, debunked this allegation and said there was no truth in it after Mr. Cameron had made similar statements to the Observer of the UK,” he said.
ADVERTISEMENT
“In his book, Mr. Cameron failed to mention that I wrote him requesting his help on Chibok. Why did he suppress that information? I remind him that copies of that letter exist at the State Houses in Nigeria and London. He never called me on the phone to offer any help. On the contrary, I am the one that reached out to him.”