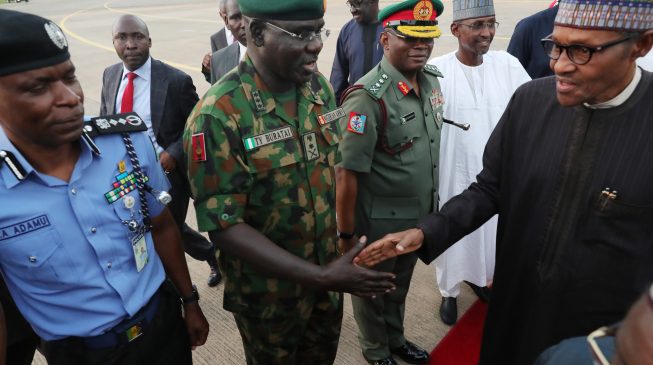 Tukur Buratai, chief of army staff, says President Muhammadu Buhari approved  ‘operation positive identification’ scheduled to commence on Friday.
Buratai said this on Thursday when he appeared before the house of representatives committee investigating the operation.
ADVERTISEMENT
The planned operation scheduled to commence on November 1 through December 23, 2019, would require citizens to move about with a means of identification.
Owing to the outrage over the operation, the house of representatives asked the military to put it on hold and directed its committee on army to investigate it.
At the committee’s meeting in Abuja, Buratai, who was represented by Usman Muhammed, chief of civil-military affairs at the Nigerian army, said the president and minister of defence are in support of the operation.
He said the exercise, first launched in the north-east in September, is being extended nationwide to intercept Boko Haram insurgents who had relocated from their enclaves to other parts of the country.
He, however, denied claims that the operation would involve deployment of troops into communities across the country, adding that it is a “special operation fused into ongoing operations”.
He said it is an intelligence-based operation to intercept insurgents and other “criminal elements” relocating from the north-east to other parts of the country.
Abdulrazak Namdaz, the committee chairman, expressed reservations over the operation which he said is not within the scope of the army but other security agencies like the police and immigration.
He added: “It cannot take effect from tomorrow (Friday). We have actually told them that this thing requires sensitisation, will require a lot of media work, press conferences and Nigerians need to be fully informed; we will talk to relevant authorities to see that this thing is shifted in terms of identification.”
FALANA: ARMY TAKING OVER POLICE DUTIES
In a suit filed before a federal high court in Lagos in which Abubakar Malawi, minister of justice, was joined as a co-defendant, Femi Falana, senior advocate of Nigeria, sought an order stopping the army from proceeding with the operation.
He argued the operation is “unconstitutional, illegal, null and void” and asked the court to declare that the army is not empowered to take over police duties.
ADVERTISEMENT
He said while the constitution empowers the president to deploy the armed forces for the suppression of insurrection and acting in aid of civil authorities, “there is no insurrection in every part of the country which the Nigeria police cannot contain to warrant the deployment of armed troops all over the country”.