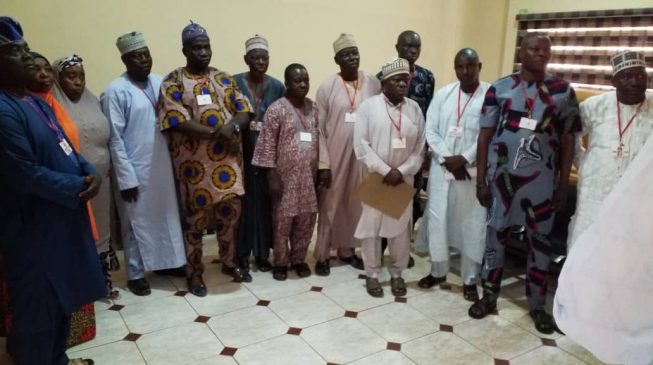 The Kwara zonal office of the Economic and Financial Crimes Commission (EFCC) has arrested 16 local government chairmen for allegedly misappropriating a N4 billion loan.
The LG chairmen are also being accused of diverting 10% of the monthly internally generated revenue for their personal use.
ADVERTISEMENT
A statement by Wilson Uwujaren, EFCC’s spokesperson, said the commission found out that the council chiefs held a meeting and agreed to share N100 million among themselves after securing the loan.
The EFCC listed the local government chairmen to include Risikat Opakunle; Saidu Yaru Musa; Umar Belle; Ayeni Dallas; Fatai Adeniyi Garba; Lah Abdulmumeen; Raliat Funmi Salau; Aminat Omodara and Muyiwa Oladipo.
Others are Oladipo Omole; Abdullahi Abubakar Bata; Saka Eleyele; Lateef Gbadamosi; Oni Adebayo Joseph; Omokanye Joshua Olatunji and Jibril Salihu.
“The suspects had on, February 7, 2018, written a N4 billion loan request to the Ilorin Sterling bank manager in order to pay the salary arrears to the state universal basic education board (SUBEB) teachers, local government staff and pensioners,” the statement read.
“The politicians were also accused of diverting 10% of the monthly internally generated revenue for their personal use which was paid directly into their personal accounts against the financial regulations.
“All the suspects while undergoing interrogation by the operatives of the commission admitted that N100 million was shared from the loan and also received 10% of the internally generated revenue.
“The council bosses are now pleading with the EFCC to give them some time that they would pay back what they benefited from government’s money.”
ADVERTISEMENT
The commission said the politicians are still in their custody and may spend the weekend with them. It added that they will be charged to court after the investigations had been concluded.