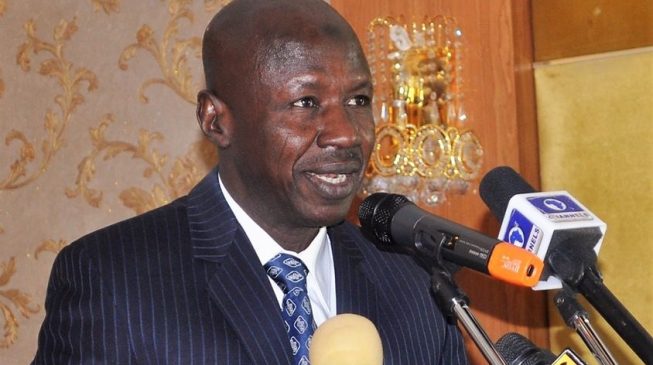 Ibrahim Magu, acting chairman of the Economic and Financial Crimes Commission (EFCC), says the $40 million worth of jewellery seized from the residence of Diezani Alison-Madueke, former minister of petroleum resources, will be auctioned by its actual value.
Magu disclosed this on Thursday while briefing stakeholders on the crusade against cybercrime and fraudsters.
ADVERTISEMENT
In September, a federal high court in Lagos ordered the permanent forfeiture of the jewellery to the federal government.
Magu said the auctioneers would also sell off the luxury houses recovered from the former minister and other fraud suspects.
“We want to make sure that there’s transparency in the process. Like what we’re doing now in Port Harcourt. There are about 242 trailers and tankers that we are about auctioning. In fact, in the next two weeks, we will auction them. We will advertise, you will see it very clearly,” he said.
“The idea of selling recovered proceed of crime for peanuts is bad. This time around, we are not going to tolerate it.
“The era of auctioning forfeited properties at gross devalued prices is gone. We are going to do everything possible to know the real value of any forfeited property and we will invite professionals and merchants in the area to tell us the actual prices and the current worth and go back to the court to give reasonable price for every forfeited property before auctioning it.
“I want us to involve everybody…we have to involve the courts, the Federal Ministry of Justice, Department of Petroleum Resources and maybe the army, in whose premises these things are kept.  We have to be very transparent.
“Even the houses, there are auctioneers coming from outside the country who are internationally acclaimed and accredited auctioneers. For instance, the jewellery we recovered from Diezani, we need to bring in international auctioneers because these are things that are bought from abroad. We’ll get in touch with the manufacturers, with people who are in charge of these things.”
Magu appealed to the mothers of internet fraudsters better known as “Yahoo boys”, who he said have now formed associations, to desist from supporting them.
“We are looking at how we can rehabilitate the Yahoo Boys; these are young boys, who have graduated, who are in the university. We want to see how we can sensitise them; how we can make them know that the Yahoo Yahoo business is wrong,” he said.
“And we are also appealing to their mothers. The parents of these children, they have actually formed an association of Yahoo Yahoo Mothers’ Association – Yes; they are there – Association of Mothers of Yahoo Yahoo Boys.
ADVERTISEMENT
“Some of them will say the father did not do anything; these boys came, demolished the house and put up a new structure. If you see the cars that we have recovered, you will think that we are in car business. These are all Yahoo Yahoo. All brands of cars – Jaguar, Rolls Royce.”