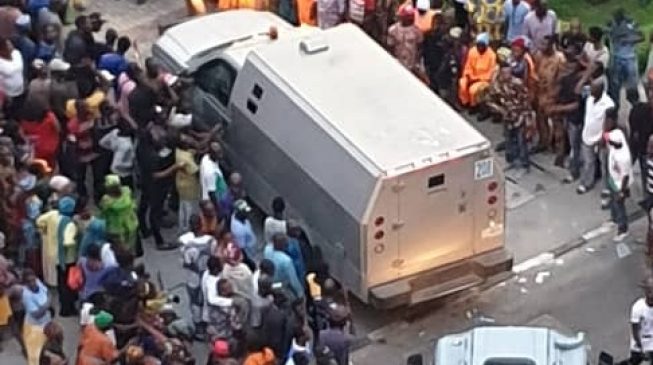 Ibrahim Magu, acting chairman of the Economic and Financial Crimes Commission (EFCC), snubbed a question on the petition against Bola Tinubu over alleged cash-laden bullion vans linked to him.
Tinubu is the national leader of the All Progressives Congress (APC).
ADVERTISEMENT
In February, viral pictures on social media showed two bullion vans being driven into Tinubu’s Bourdillon residence in Lagos on the eve of the presidential election.
The APC leader said the money in the vans was his and not ballot papers or money for vote-buying as alleged by some Nigerians.
“Excuse me, is it my money or government money? So, even if I have money to spend in my premises, what is your headache?” he said.
“Excuse me, if I don’t represent any agency of government and I have money to spend, if I have money, if I like, I give it to the people free of charge. As long as not to buy votes.”
On October 5, Deji Adeyanju, an activist, petitioned the EFCC, asking the agency to probe the matter.
“We know they won’t take any action but we will submit the petition,” Adeyanju said in a Facebook post.
ADVERTISEMENT
Speaking with journalists on Friday at the EFCC headquarters in Abuja, Magu avoided questions regarding the petition.
“You want me to talk about a petition here? Next question, please,” he said.