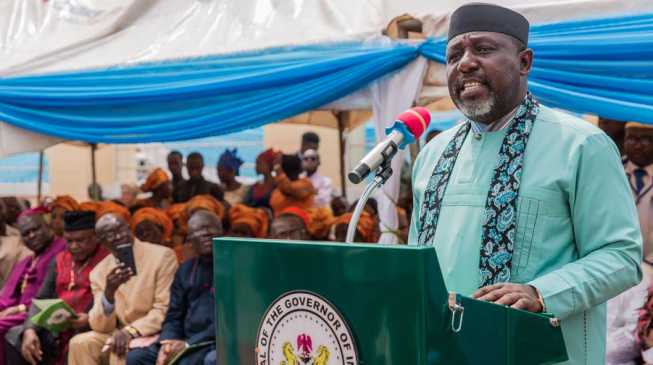 Rochas Okorocha, senator representing Imo west, says the ruling All Progressives Congress (APC), may cease to exist at the end of President Muhammadu Buhari’s tenure.
He said unless steps were taken to reposition the leadership of the party, it would lose power in 2023.
ADVERTISEMENT
The former governor of Imo state said the internal crisis within the APC has made it lose focus.
He spoke with reporters at the Kano government house during a visit to Abdullahi Ganduje, governor of the state, on Saturday.
“A political party should be a group of people who share common political interests and beliefs. People who pursue a common goal or common objective for the good of the common man,” he said.
“That will be my understanding of a political party, but any political party that is full of internal crisis is no longer a political party in the real sense of the word.
“This idea of crisis and commotion shows that the said party does not have a common ideology. If the ideology is one and you believe in one thing, there should not be reason for disagreement at that level. You might have a minor disagreement, but when it comes to the issue of do-or-die, it is no longer a political party.
“I have said this earlier, APC is a party that we hurriedly put together when we were governors because we felt that the government at that time was not living up to expectations and we wanted to make sure that we brought about change at that time.
“That is why we came together and formed the All Progressive Congress and we ensured that the party got power in 2015. That was how it was then and we achieved that.
“Right now, I think we should continue with the same pace that we started with in 2015 election but that doesn’t seem to be the case. President Muhammadu Buhari gave character to APC. He brought his integrity to bear on the party. He made the party what it is in the northern part of the country and the masses of the North who saw him as a true leader, and we all rode on that to achieve that victory, but after the credibility of Buhari into this party, there seems to be no alternative in the same manner that will drive this party to 2023 victory.
“This is why I expressed my concern that if we are not very careful, APC might go with Buhari in 2023, and that will be a very unfortunate situation for the founding fathers of APC. The party needs to show purposeful leadership, show character.”
On the crisis between Godwin Obaseki, governor of Edo state, and Adams Oshiomhole, national chairman of the ruling party, Okorocha said a true party would not work against itself.
“So, let us see what we can do in this country to redefine what we mean by internal democracy. This why people have options, this is why we don’t believe in one party system. We must have different political parties and identify the one that is in line with your vision, the one that is line with his political believe,” he said.
“So, until we have such a political party that is more like a family in their belief, then we are still growing our democracy. Talking about what is happening in Edo state, it is unfortunate but a true political party cannot work against itself.
ADVERTISEMENT
“So, I want to advise them to reconcile and resolve their differences. The truth is that a party that is divided can never stand.”