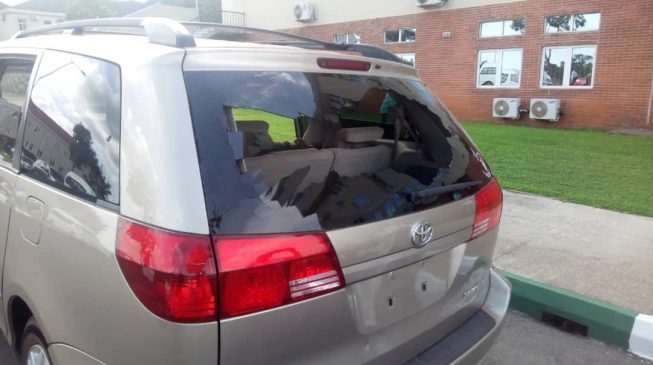 Godwin Obaseki, governor of Edo state, and Rilwan Akiolu, the Oba of Lagos, and Aderemi Makanjuola, the chancellor of Edo state university, were attacked on Saturday at the house of Adams Oshiomhole, national chairman of the All Progressives Congress (APC).
According to a statement signed by Crusoe Osagie, special assistant on media to the governor, they all escaped uninjured.
ADVERTISEMENT
The governor and the other guests had attended the maiden convocation ceremony of the Edo University, Iyahmo in Etsako west local government area of the state.
The varsity is said to be opposite Oshiomhole’s home in Iyahmo.
A witness said the Lagos monarch and the governor had gone to Oshiomhole’s house to honour the former governor’s invitation for a launch after the ceremony at the university.
“The former governor’s house is just opposite the university. Governor Obaseki, the Oba of Lagos and other guests had gone to Oshiomhole’s house for lunch when they were attacked by thugs led by one Romeo, said to be one of Oshiomhole’s cousins,” the witness said.
ADVERTISEMENT
Several vehicles were reported to have been smashed and Obaseki’s security team had to intervene to stop a bloodbath.