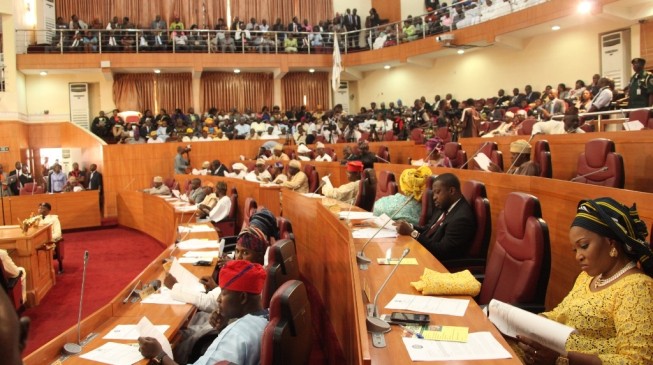 The Lagos state house of assembly has amended the 2018 land use charge after a public outcry against the law.
The 2018 land use charge required property solely occupied by the owner for residential purpose to be charged at a rate of 0.076 percent per annum.
Also, a property occupied by the owner and tenant(s) or third parties will be charged at 0.256 percent per annum, while an investment property fully occupied by tenants or third party(ies) for revenue generation will be charged at 0.76 percent per annum.
The Ikeja branch of the Nigerian Bar Association (NBA) had resisted the implementation of the law, asking people not to pay.
In a u-turn on Monday, the state assembly amended the law and adopted the resolution of its committee.
According to TheCable, the adoption came after the six-man ad hoc committee constituted to review the law presented the report of its findings following a public hearing.
Rotimi Olowo, chairman of the committee, said the public hearing revealed that the increase is generally “perceived to be arbitrary and unrealistic in a recessed economy” and that the state government should revert to the land use charge of 2017.
He said participants and stakeholders agreed that a vacant plot of land and unoccupied properties should be exempted from the land use charge liabilities.
“The Committee also posited that Section 17(c) (i) there is no need for 50% payment by an aggrieved owners over disputed charges before their eligibility to appeal; while aggrieved residents/owners should pay the preceding year’s charges while the disputed charges are being resolved; amongst others,” a statement from the assembly read.
“The Committee however, recommended that as from the commencement of this Law; there should be proper classification of commercial and residential properties in the State for the purpose of levying charges in accordance with the provision of this Law by the property identification officers of the Ministry.”
The committee also recommended that “there shall be twenty percent (20%) increase from the fees chargeable before the repeal of the Land Use Charge Law Ch. L79 2015, and the increment referred to in sub-section (1) above shall be renewable every ten (10) years; Pensioner should be replaced with a person who retires from a Pensionable Office; The owner of the property is liable to pay Land Use Charge in respect of any taxable property.”
“It should be noted that from the date when Land Use Charge is levied on a property in accordance with this Law, the provisions of the Assessment Law, Land Rates Law, Neighborhood Improvement Charge Law and any amendments made pursuant to it shall cease to apply to that property amongst other recommendations,” it said.
The assembly adopted the recommendations.