If you are from the south-south, you are already disadvantaged, says Seyeifa, ex-DSS DG 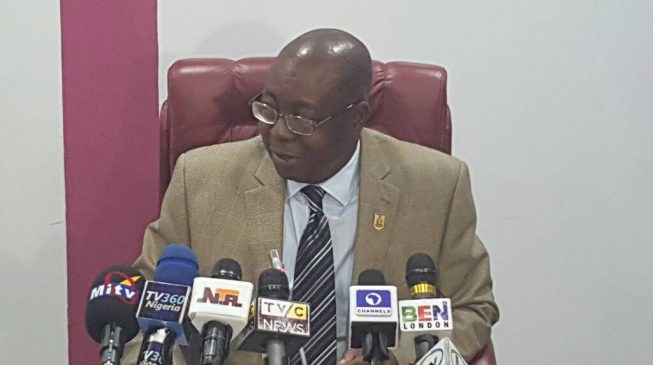 Matthew Seiyefa, former director-general of the Department of State Services (DSS), says there is inequality in the spread of leadership positions at the federal level.
According to THISDAY, Seiyefa said this at the launch of the Bayelsa Tertiary Education Loan scheme in Yenagoa, capital of the state.
Culled from TheCable, the Bayelsa indigene reportedly said anybody from the part of the country he hails from was already disadvantaged.
Seiyefa came into limelight on August 7, 2018, when Acting President Yemi Osinbajo sacked Lawal Daura as director-general of the DSS following the invasion of the national assembly.
But one month after, he was compulsorily retired by President Muhammadu Buhari while Yusuf Bichi, current head of the agency, replaced him.
Buhari was on medical vacation in the UK when Osinbajo removed Daura.
Recalling his ordeal in the last days before his retirement, Seiyefa said John Pepper Clark, a notable scholar, and Seriake Dickson, governor of Bayelsa state, stood solidly behind him.
He attributed his survival in the years that he spent at the DSS to the sound education he got while growing up, noting that although his promotion was sometimes delayed unjustly, he could not be ignored for too long by the powers that be.
“I want to thank two people who encouraged me during that period (crisis in the leadership of DSS). Prof. JP Clark, who was in Lagos and constantly, encouraged me not to give in but to stay and His Excellency, our dear governor,” he reportedly said.
“In fact, on two different occasions, he offered to employ me if I should leave, but I stayed the course.
“When August 7 last year happened, I was told of the jubilation in Bayelsa State. That they heard that one of their own is the head of a federal agency. People went to beer parlours, they bought drinks and they were happy and that moment of shared stakeholding in the Nigerian nation is very important.
“That moment of celebration that we too belong here is very important. But people made it happen and His Excellency is one of them. I appreciate what we have been through as a people.
“Education, as has been said, is it. I particularly want to encourage the boarding schools, because in the years to come, as far as I am concerned, that will be the game changer.
“When I look back at my own story, the secondary school that I attended made all the difference. And for the young people, at the corporate and federal level, the years ahead will be very tough, competition will be very fierce and hard.
“At the moment, at the federal level, critical agencies are thinly spread, our presence is very little. At the corporate level, we are virtually nowhere, but those are opportunities for us because we cannot all be here struggling for crumbs, we need to be out there too.
“But how to be there and survive depend on education, the quality of education you have. I went through a lot of difficulties, but the education I had put me through.
“Because you are from here, you are already disadvantaged. But if you are also poorly educated, then that is double jeopardy and you will be doubly endangered.
“As it is, we are poorly represented at the federal level. Since you are already disadvantaged coming from here, if you don’t have quality education, then you don’t stand the test of time.
“On occasions, during my career, I was denied promotion, not because of anything else, but because people were being positioned. That is the reality. But if you are good and have a point to make, they will look at you in the end because you don’t have any traditional ruler to run to, no religious leader to run to and that is the reality. Identity politics is a fact of life in our nation.”
Seiyefa maintained that education remained the key, insisting that anyone with a sound education can stand the test of time and perennial scrutiny.
He is currently the pro chancellor of the Niger Delta University (NDU) in Bayelsa.