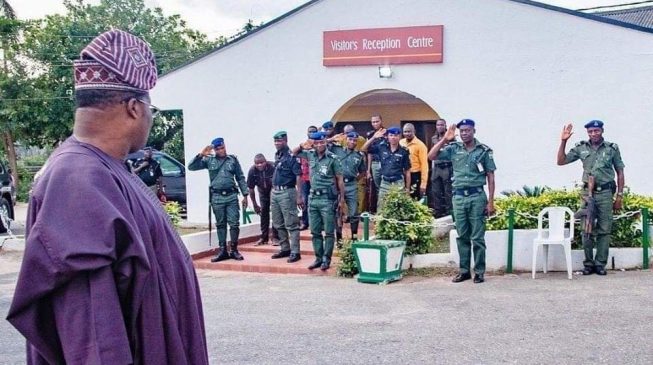 Seyi Makinde, governor of Oyo state, says Abiola Ajimobi, his predecessor, left a balance of N19,000 from N5.2 billion he allegedly withdrew three weeks to handing over power.
The governor disclosed this during a live programme of Oyo state broadcasting corporation, tagged “Live chat with GSM, a quarterly session with the Oyo State Governor”, on Saturday.
Culled from TheCable, he said the Ajimobi administration was marred by corruption, adding that the persons involved in the N5.2 billion withdrawal will soon be called to explain their roles.
Makinde said the state’s financial status was in a poor state when he assumed office. He added that his administration has increased internally generated revenue after blocking identified loopholes.
“If I should talk about the finances of Oyo state as at the time we came on board, some people will not be able to walk on the streets. Up till date, we have not bought vehicles for the office holders,” he said.
“If we are to buy official vehicles for myself and other office holders, we will not spend less than N3 billion and we cannot afford that now. Up till today, I am still using my personal cars in office. Our priority is to the people. We prioritise what we can do to the people who gave the opportunity to serve them.
“On May 6, 2019, three weeks to take over, the last administration withdrew N5.2 billion and spent it to remain N19, 000 by May 29. Soon, those involved will have to explain how they spent the money to the people.”
The governor said he was scared when he discovered that Ajimobi’s administration operated over 60 banks.
Makinde said his administration has been able to prune down the accounts and centralised it to promote transparency.
“When I resumed, I was scared. The government was running over 60 banks accounts. So I asked for all the balances of the accounts. A particular account has N300 million, and another has N20 million. I asked the accountant general to prune the accounts down and put all the money in one account and which came to about N6 billion,” he said.
“When we assumed office, some people came to me and said that this is how they share money. I said don’t share the money to me. Let us use it to better the lives of the people of the state. IGR has gone up a bit because we have blocked loopholes.”
The governor said his administration will continue to prioritise the people of the state and deliver on its mandate.