Malami: Sowore, Dasuki released out of compassion — not international pressure 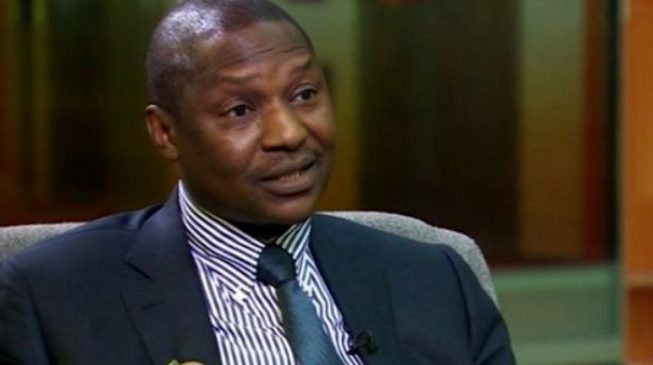 Abubakar Malami, attorney-general of the federation (AGF), says Omoyele Sowore and Sambo Dasuki were released out of compassion and because of the government’s commitment to the rule of law.
Umar Gwandu, his spokesman, quoted him in a statement as saying this in interviews with the BBC Hausa and the Hausa service of the Voice of America.
Culled from TheCable, Malami, who doubles as the minister of justice, said the release of both men was not due to either domestic or international pressure, and that his office received no letter from any US senator.
A letter from the US congress requesting the release of Sowore, surfaced online after he regained his freedom.
Malami said the government has the right to detain Sowore and Dasuki while challenging the order admitting them to bail up to the supreme court.
“The only reasons for the release of Omoyele Sowore and Sambo Dasuki revolved around our commitment to the rule of law, obedience to court orders and compassionate grounds,” the statement read.
“It is important to understand the fact that as far as the law is concerned and in relation to the Nigerian justice system, one has multiple options after a court has ruled on a matter-the right to appeal the said ruling, the right to ask the same court that issued an order to vary or review the terms of the order as well as the right to request for Stay of Execution of the order pending the hearing and determination of an appeal in that matter.
“Even if we received any communication from them that will never be the basis on the part of the Federal Government to obey or disobey court orders emanating from Nigeria.
“The critical question that you may ask should be whether there is a strong suspicion of committing an offence or not. If there is a strong suspicion of committing an offence which deserved, as a matter of necessity, to be investigated through legal steps then there was no room for thinking of witch-hunting an individual, scoring acrimonies or personal vendetta against anyone.
“The time has now come for Sambo Dasuki and Omoyele Sowore to also enjoy bail based on the merit of their individual cases. They were charged based on their individual cases, taken to court, granted bail and now have been released. All the individuals involved were treated fairly and justly; they were taken to court, enjoyed the court’s favourable discretion and they were all released.”
Asked why Ibraheem El-Zakzaky, leader of the Islamic Movement in Nigeria (IMN), was not released, Malami told the BBC Hausa that the government has no power to interfere in a state matter.
“Therefore, the federal government will not interfere in a legal right that is a breach of state rights,” he said.