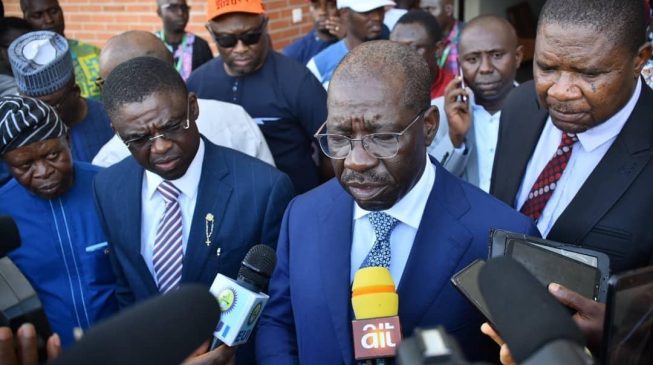 Godwin Obaseki, governor of Edo state, says Adams Oshiomhole, national chairman of the All Progressives Congress (APC), remains suspended from the party in the state.
In November, the APC faction loyal to the governor suspended Oshiomhole after a no-confidence vote was passed on him.
Speaking at a meeting with some leaders of the party in Benin on Friday, Obaseki said the APC national chairman was suspended from the state chapter of the party because he was “creating problems in his own house.”
Culled from TheCable, the governor said Oshiomhole would be re-accepted into the fold when he is “remorseful and apologetic”, adding that Oshiomhole “has done something bad against God and the people of Edo state.”
“Can you imagine a national chairman that is creating problems in his own house? Because of that, we had to suspend him and he remains suspended,” he Obaseki said.
“We pray that God should have mercy on him because he has done something bad against God and the people of Edo state.
“He should find his way back into the party and apologize to all of us.”
Obaseki and Oshiomhole shortly before the governor declared interest in seeking another term. The disagreement reached its height when lawmakers loyal to Obaseki were inaugurated secretly.