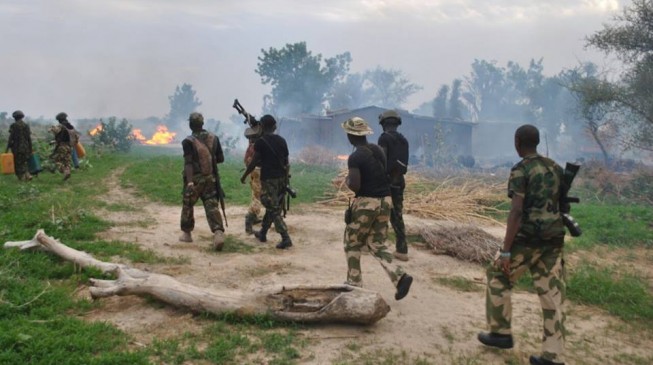 The Nigerian Army says tens of Boko Haram insurgents around communities in Adamawa state have been dislodged by soldiers involved in  the fight against insurgency.
Aminu Iliyasu, army’s operation media coordinator, made this known in a statement on Thursday.
Culled from TheCable, the soldiers, Iliyasu said, have been on relentless clearance, and after flushing the insurgents out, their flag was lowered in one of the communities.
“The relentless clearance and other offensive operations being conducted by the troops of Operation LAFIYA DOLE against remnants of the Boko Haram and Islamic State’s West African Province (ISWAP) terrorists under the ambit of a special operation nicknamed Operation RUFE KOFA is gaining traction by the day,” the statement read.
“In a laudable demonstration of bold action in combat, on 24th December 2019, troops of 192 Bn, Sector 1 Operation LAFIYA DOLE conducted clearance operations from Madagali through Waga Lawan, Jaje to Fadama all in Madagali LGA of Adamawa State. During the operation, the troops had a meeting engagement with elements of the Boko Haram criminals and a fire fight ensued.
“The Boko Haram insurgents were decisively dealt with, forcing them to hurriedly flee the location in disarray. Troops destroyed all of the criminals’ structures, farmland, harvested grains stored in underground bunkers and one Lister grinding machine. In another encounter at Fadama village,  the criminals’ flag hoisted on a tree was captured and immediately lowered after the troops had effectively subdued the criminal insurgents with superior fire power forcing them to flee in disarray. Items recovered from the criminals include 2 bicycles, copies of Quran and several other personal effects. Interestingly, no causality was recorded by the gallant troops.
“Similarly, the troops of 151 Bn, Sector 1 Operation LAFIYA DOLE handed a humiliating defeat to a bunch of Boko Haram criminal insurgents in the early hours of 25th December 2019 while on clearance operation conducted deep into the Sambisa Forest. During the encounter, one Boko Haram suicide bomber tried to force himself into the troops’ firm base, but the gallant troops aborted this heinous intent by promptly neutralising him and his cohorts with effective fire in the general area. The improvised explosive Device strapped to his body got detonated in the process and his body parts were found scattered across the field. Items recovered in the aftermath of the encounter include 81 mm mortar muzzle cover, 2 rounds of anti-aircraft ammunition, one AK 47 magazine and one passport photo.”
Iliyasu said Tukur Buratai, chief of army staff, extended his goodwill message to the troops, asking them to remain resolute in their efforts at clearing and destroying all the hideouts and enclaves of the remnants of the insurgents across the theatre