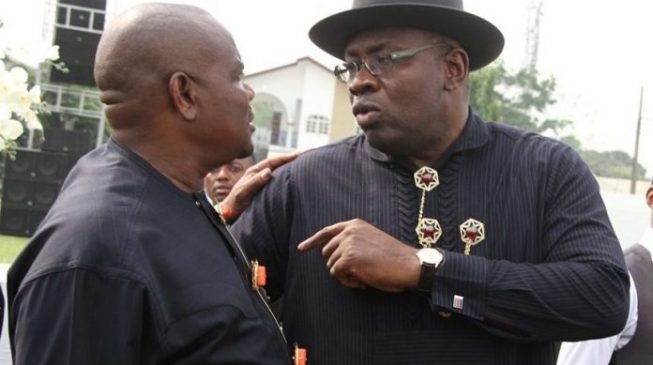 Nyesom Wike, governor of Rivers state, has alleged that Seriake Dickson, outgoing governor of Bayelsa state, concluded plans to join the ruling All Progressives Congress (APC) but Timipre Sylva, minister of state for petroleum, blocked him, TheCable reports.
Sylva, a strong APC member in Bayelsa, ran against Dickson twice but lost to the incumbent governor who has been in the Peoples Democratic Party (PDP) since his days as a house of representatives member.
At a press conference in Port Harcourt, capital of Rivers, on Monday, Wike accused his Bayelsa counterpart of working with the ruling party to prevent having any problem with the Economic and Financial Crimes Commission (EFCC) by the time he is out of office in 2020.
“Dickson concluded plans to join the APC. Timipre Sylva and Heineken Lokpobiri blocked him. He knew I have strength, he would have consulted me,” he said.
“Dickson colluded with these people so that EFCC will not arrest him when he leaves Government. If you like, carry any level of propaganda, I will protect the interest of Rivers State.”
He also accused Dickson of plotting to hijack Soku oil wells which the supreme court recently ceded to Rivers fromm Bayelsa.
The supreme court had ordered Bayelsa to transfer the oil wells and Wike insisted that the wells belong to Rivers, faulting the National Boundary Commission (NBC) that “erroneously shifted the boundary between Rivers and Bayelsa from River Santa Barbara to River Saint Batholomew in the 11th Edition of the Administrative Map of Nigeria”.
“In 2002, the NBC altered the boundary in the 11th Edition of the Administrative Map of Nigeria. They made a mistake by shifting the boundary from River Santa Barbara to River St Batholomew. At the Supreme Court, the NBC wrote a letter a admitting their error,” he said.
“The Supreme Court made an order for the NBC to correct the error of the 11th Edition in the 12th Edition.”
“We had to sue the NBC to enforce the order of the Supreme Court where they were directed to ensure that the Boundary between Rivers and Bayelsa State is River Santa Barbara.”
At the weekend, Dickson had accused Wike of deliberately instigating disunity in Ijaw land and under developing Ijaws in Rivers after an Abuja court transferred ownership of the Soku oil wells from Bayelsa to Rivers.
The Bayelsa governor also visited an Ijaw monarch who is from Rivers.
Reacting to this, Wike said: “The outgoing Bayelsa State Governor is the one trying to cause disharmony by attempting to collect what belongs to the Ijaw in Rivers State.
“How can Dickson invade Rivers State when he cannot defend Bayelsa State? The person talking about invading Rivers State in January 2020 lacks respect for Protocol. If he was well schooled, would he use that phrase that he wants to invade Rivers State?
“You have no respect. A Traditional Ruler who is a First-Class ruler, recognised by Government and you say you are coming to a state as a Governor to see Rivers Ijaw people without observing basic protocol. Protocol demands you call your colleague that you are coming to the State. Even then, the Traditional Ruler failed to communicate with the State Government.
“And I said, if you do this next time, I will withdraw the Recognition. I didn’t say I will dethrone him. I don’t make Chiefs. But I have the power to recognise or take back recognition if you run foul of the law. I have no regrets about it.vAnyone who runs foul of the law, I will withdraw the Recognition and heaven will not fall. I never said that I will dethrone the Amanyanabo of Kalabari.
“I said that I will withdraw the Recognition by the Rivers State Government if he continues to disrespect the office of the Governor and not play according to the rules.”