A Deal That Has Two Elections, Rather Than Mideast Peace, as Its Focus

The Israeli-Palestinian peace plan unveiled by President Trump and Prime Minister Benjamin Netanyahu sounds more like a road map for their own futures than for the Middle East.

WASHINGTON — A president trying to prevail in an impeachment trial stood with an Israeli prime minister under indictment on Tuesday to announce a long-delayed plan for resolving the Israeli-Palestinian conflict, and the result sounded more like a road map for their own futures than for the Middle East.
For President Trump, it is a plan that builds on his decision to move the United States Embassy to Jerusalem — a huge political success among his conservative Jewish donors and evangelicals that, contrary to predictions, did not touch off a violent reaction in the region.
Mr. Trump now enters the heart of his election campaign declaring that he has delivered a plan that makes Jerusalem the undivided capital of Israel and relegates the Palestinian capital to a suburb, and one that Mr. Trump, in a triumph of real-estate branding, is suddenly calling “East Jerusalem.”
And the timing is no accident: At a moment when cable television is focused on impeachment and the prospect that the former national security adviser John R. Bolton might testify, Mr. Trump had a chance to stand in the East Room and cast himself as a peacemaker. With rare self-discipline, he never mentioned the word impeachment.

For his part, Prime Minister Benjamin Netanyahu of Israel marches toward his March elections wielding the potent argument that Israelis should ignore his indictment on corruption charges and focus on the fact that he, by force of his relationship with Mr. Trump, moved Washington to give permanent legitimacy to the Jewish settlements in disputed territory.
By Sunday, the prime minister said as he was leaving Washington, Israel will essentially annex the strategically vital part of the Jordan Valley that its military already controls. As the Israeli election nears, those moves allow him to sell himself as the Trump whisperer, the indispensable man who bent the White House to his will.
“Strip away the domestic and Israeli political considerations that determined the timing of the plan’s release," said Robert Malley, the president of the International Crisis Group and a former Obama administration official, “and the message to the Palestinians, boiled down to its essence, is: You’ve lost, get over it.”
That message, implicitly or explicitly, rewrites the art of the Middle East deal. By tilting the map of a future Palestinian state so precipitously in Israel’s direction, Mr. Trump has embraced a plan that essentially dismantles 60 years of bipartisan support for a negotiated process between Israelis and Palestinians, in which both make concessions and land swaps that would define the lines of a new map.

As Mr. Trump acknowledged, Washington would no longer play the role of neutral arbiter — even while vowing to be Israel’s source of protection. Instead, the United States has drawn the lines in a series of maps that sketch out a future Palestinian state that is so gerrymandered that it requires the construction of a giant tunnel across Israel to connect two areas of Palestinian control.
To Mr. Trump, this is the merger of deal making, Middle East urban planning and election-year politics — or rather, potential deal making.
A few days ago Mr. Trump said, “I think we’re relatively close but we have to get other people to agree to it.” In other words the “deal of the century” was no deal at all. And the other people were the Palestinians, who dismissed the proposal and the accompanying map on Tuesday hours after its publication. 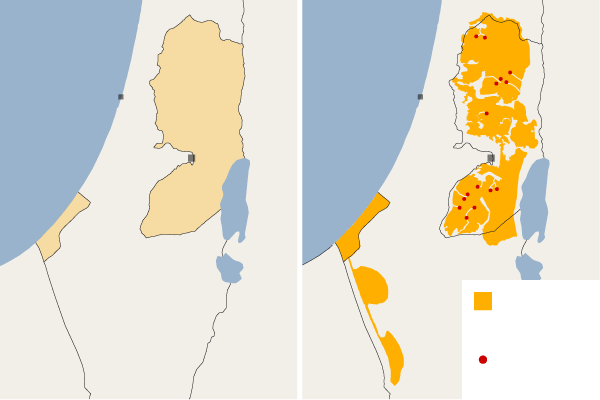 Current
Proposed
West
Bank
Tel Aviv
Tel Aviv
Jerusalem
Jerusalem
Gaza
Gaza
ISRAEL
State of
Palestine
EGYPT
JORDAN
EGYPT
Israeli
enclaves
30 miles
For election purposes, Mr. Trump does not need a deal, he simply needs the impression that progress is being made.
And at the White House on Tuesday, the ambassadors from the United Arab Emirates, Bahrain and Oman — but not Saudi Arabia, the country Mr. Trump and his son-in-law, Jared Kushner, has worked hardest to woo — were in the room for the announcement, a seeming endorsement of his approach, if not the specifics.
Their presence would have been unimaginable in the past, especially for any announcement that fell well short of creating a real Palestinian state.
And this one certainly falls short of that goal. Mr. Trump’s 180-page plan would require the Palestinians to accept only partial sovereignty over a future Palestinian state, at least for a considerable time, and give up any claim to territory where the Israelis have already accepted settlements. And it asked them to take the bet that, as Mr. Trump promised, they would ultimately get rich because of a $50 billion investment fund, paid for by Arab neighbors.
It has a brilliant twist: The Palestinians do not have to say yes or no for four years. That means their bottom-line response would not come until the very end of Mr. Trump’s next term, if he is re-elected. In the meantime, Israel would freeze settlements in the territory that Mr. Trump has set aside for the Palestinians, much of it areas the Israelis have little interest in.
That proviso defers all the hard questions for several years of negotiations — with their inevitable breakdowns and crises. But it gives Mr. Trump the campaign-trail talking point that he has fulfilled a 2016 promise and proposed an actual solution, rather than just a process.
The proposal, of course, helps Mr. Netanyahu by moving the goal posts. The status of Jerusalem is set out in the Trump document, rather than being a subject of negotiation. And while past presidents lectured Mr. Netanyahu about his creation of Jewish settlements in territories that are subject to negotiation, Mr. Trump’s plan makes them a permanent feature.
To critics, that is the fatal flaw.
Senator Christopher S. Murphy, Democrat of Connecticut, who was among the lawmakers briefed by Mr. Kushner at the White House, called it “a total abandonment of decades of U.S. Middle East policy.”
He was referring to the longtime American support for a deal that would include only modest adjustments to the Israeli borders drawn in 1967, the year of the Arab-Israeli War, and by a process created in the Oslo Accords, which began in 1993 and largely ended with the failed summit in 2000 at Camp David. The premise of those talks was that the Israelis and Palestinians would set up a complex process and inch their way toward agreements on borders, settlements, political rights and the withdrawal of the Israeli military from Palestinian lands.
There were years of talks, stalemates, “road maps to peace,” collapsed negotiations and intifadas.
Mr. Trump, the disrupter, has made it clear he does not believe that approach would work. On Tuesday, he noted that every president since Lyndon B. Johnson had tried and failed to negotiate a peace deal. Always the real-estate mogul, Mr. Trump has declared that he is more interested in working with existing facts on the ground than on creating processes.
So his plan, three years in the making, is less about future negotiations and more about cementing what exists today and making deals around the edges. If the Palestinians take it, he suggested, riches would follow. There would be a million new jobs, he said, and poverty would be cut in half. Mr. Trump has offered a similar incentive to the leader of North Korea, Kim Jong-un.
It was pretty familiar Trump language, born of a certainty that economic incentives will overcome ethnic, tribal and religious differences, despite considerable evidence to the contrary. And for the Israeli prime minister, it was a plan tailor-made for an election four weeks away. So tailor-made that a dozen Democratic senators wrote in a letter to Mr. Trump on Tuesday that “the timing of this proposal to coincide with Prime Minister Netanyahu’s indictment on bribery charges also raises disturbing questions about your intention to intervene in the Israeli election process.”
Not surprisingly, Mr. Netanyahu disagreed. “It’s a great plan for Israel,” he said, with an enthusiasm he rarely showed during visits to the White House in the Obama years. “It’s a great plan for peace.”

This article was written by David E. Sanger for The New York Times.