Four-storey building collapses as fire breaks out at Lagos market 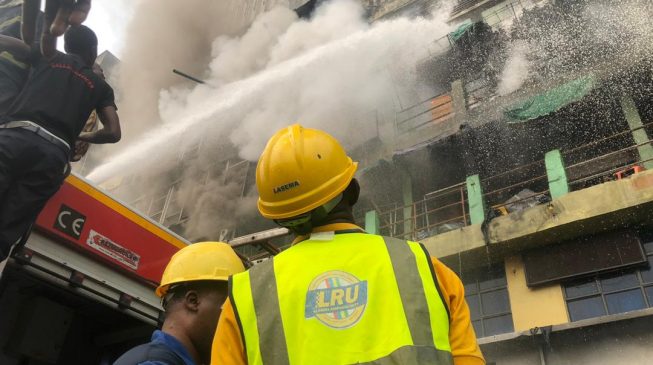 There has been another fire outbreak involving a four-storey building, which collapsed, at Balogun market in Lagos state.
The fire was said to have started from Anambra Plaza, on Martins street, beside Great Nigeria Limited, Leventis bus stop, on Wednesday morning.
In a series of tweet, the Lagos State Emergency Management Authority (LASEMA) said rescue operation is in progress.
“On arrival at the above scene, it was discovered that a four storey-plaza had been gutted by fire. Cause was identified as resulting from improperly stored fuel,” it said.
“The fire escalated to adjoining buildings totaling seven (7) in number and is being contained by the Emergency responders i.e LASG Fire Service and the Federal Fire Service and NPA Fire Service. Seven buildings are affected and two have collapsed.
“Given that two buildings have since collapsed, we have found it necessary to insert a gulf around the affected buildings and carry out integrity tests on all of them. We appeal for calm.”
Culled from TheCable, Olufemi Oke-Osanyintolu, director-general of LASEMA, also said seven buildings are on fire on Martins street at the market.
In November, there was a fire outbreak which affected a six-storey building in a section of the market, Oluwole by Martins better known as Mandilas by traders.
There was another fire incident within the market at Dosunmu Street involving a three-storey building of lock-up shops.