Here's what you should know about fake relationship with God

There's a life you would live that even the wicked man would say let us spare him...until you allow the word of God to make use of you, you are carnal....as long as you are not emulating Jesus Christ you are carnal. 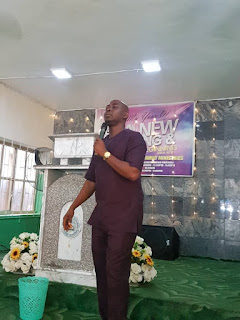 2019 was a year of messages from God to His children at the El-Shaddai Salvation Family Ministries (ESFM), where truth is evidently preached by the senior pastor Benson Enakhena. As the year rounded off, the church basked in a series of messages. Godfreytimes brings you one of the messages titled: Fake Relationship with God. In this message, the fiery apostle who with the direction of the Holy Spirit teleguides his preaching with relative issues, used a poor village and a king to bring about a very cogent question, described the difference between fake and lack, and disclosed what we should know about fake relationship with God.

Below are some insightful excerpts from the message.

No matter how poor a village is, have you ever gone to a village where there is no food in the King's house? Then if we are the children of the King of kings, why are we hungry? Because when your father is a King and you have a fake relationship with him then you cannot boldly enter the palace.

A fake relationship with God is when you pretend to follow God Matthew 15:8 that is a fake relationship...oh I am born again and you see the person speak in tongues for five hours but his or her heart is far away from God...tell your neighbor search yourself because I the pastor am not exempted from this message...some of us don't even relate with unbelievers but secretly we do far more worse than what they do.

Fake relationship with God is when man follow man instead of God....this is what is happenning in our country today. If you ask somebody if they were Christian? He/she would say no. I am a redeemer. Isaiah 29:13 are you a believer? No I am a member of MFM. Do you think on the last day God will ask you whether you are a member of ESFM? Who cares? I am a Catholic. I am a Baptist. Who cares? What matters is your relationship with God. The Christians we have these days thrive in saying my pastor said, our reverend said but fail deeply with saying what the bible said. My daddy in the Lord said...my mummy in the Lord said...we place them higher than the word of God and we don't know that the word of God is Jesus and God himself created the world with the word. If God created the world with the word and you don't have the word, what are going to use to create your own path? Your empire, what will you use to create it?  If Jesus himself that is the word,  made use of the word after forty days and forty nights...He did not command fire upon Satan, He did not command thunder upon Satan, He used himself to defeat Satan...because He is the word of  God. Some boast of being a born again for over forty years but cannot boldly in no time give two bible verses out of five asked of them. I have told the workers of the church during the worker's meeting that there would be days when I will just tell one of them to go to the pulpit and preach because a warrior for God is ever ready. Those who are looking up to man, again, I will have you know that the network of a man can disconnect. MTN can be switched off or the battery can be off too but there's only one network that is ever ready and available for connection and that is the Holy Ghost network. Before you dial, He says yes I am available what do you want? If you now disconnect yourself from that network, what happens to you when you have an emergency? After reading Isaiah 29:13, some would say I am going to Night Vigil so that the pastor will not say I didn't come. We obey the commandments because of man not because of Him. When you get a job and the time you resume for that very job is 7am but because you don't want to lose that job you resume before 7am. And when the pastor with love ask you to stand for in order to gently rebuke you for doing what shouldn't do, you say I am changing my church, how could he rebuke me like that. Can you change or leave your job if your boss rebukes you?

A fake relationship with God is when your tongue is full of lies and deceit James 1:26

Fake relationship with God is when you hate a believer like you...1 John 2:9

It is when you disobey God's commandments...Titus 1:16