In Pictures: Highlights from the 2020 Grammys 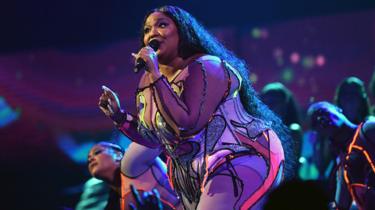 As well as the awards, there were tears, tributes, collaborations, explosions and much more besides on-stage at the 62nd Grammys, BBC is reporting.
Lizzo got proceedings underway, declaring "Tonight is for Kobe" - referring to the basketball star Kobe Bryant, who had tragically died in a helicopter crash hours earlier.
She then burst into a medley of her tracks, Cuz I Love You and Truth Hurts (which won best pop vocal solo performance), backed by an orchestra and a team of ballerinas.
It was worth the entrance fee for the flute solo alone.
During her opening speech, returning Grammy host Alicia Keys sat down at the piano and improvised some alternative Grammy night lyrics to the tune of Lewis Capaldi's ballad Someone You Loved.
It drew two big Paul McCartney-esque thumbs up from the Scotsman, as Keys name-checked him and many of the other stars in the building.
Tyler, the Creator gave a quite-literally explosive performance of his track New Magic Wand from Igor, which won best rap album.
He performed atop a podium, surrounded by balls of flames and a cast of lookalikes, all in matching Andy Warhol Wigs.
Usher demonstrated his high falsetto and hip-thrusting capabilities with a tribute to the late Prince, covering When Doves Cry and Raspberry Beret. amongst others, although his dance moves were more akin to Michael Jackson.
It all culminated in FKA Twigs indulging in a spot of pole-dancing, for reasons that remain unexplained.
Camila Cabello brought a tear to the eye, performing her track First Man - the one about meeting her first true love Shawn Mendes - in front of her actual dad, who was sat in the front row.
Alejandro wiped away tears as his daughter sang, "You were the first man that really loved me".
It all ended with a huge hug from the Cubans, as everyone else in the house reached for their phones to text their own parents (probably).
Ariana Grande invited a few special friends over for a very public sleepover, while racing through four songs - Imagine, 7 Rings, Thank U Next and My Favourite Things, from The Sound Of Music.
The performance will have set hearts racing and, presumably, got the neighbours banging on the bedroom wall.
Dark-pop sensation Billie Eilish delivered a stripped-back and beautiful rendition of her track When The Party's Over, alongside her brother, trusted collaborator and "best friend" Finneas O'Connell.
In truth the party was only just getting going for the 18-year-old who went on to "the big four" awards, including song of the year for Bad Guy.
"So many other songs deserved this," she modestly declared afterwards, proving that youth (and awards) are wasted on the young.
From the new school to the old school... Aerosmith and Run-DMC were fusing rock and rap together long before Lil Nas X could fit into cowboy boots; and the old school collaborators reunited to perform Livin' on the Edge and their classic Walk This Way.
A Kobe Bryant jersey was held aloft during the performance - one of several impromptu tributes to the star in the venue where he made his name.
Speaking of Lil Nas X, he may have only played a two minute-track but blimey, he got a lot done in that time.
The cowboy rapper performed excerpts from every single remix of his record-breaking hit Old Town Road, which meant he was joined by the likes of K-Pop superstars BTS and Billy Ray Cyrus performing what was essentially a medley of the same song.
BTS made history in the process as the first K-Pop band to play at the Grammys.
Demi Lovato got totally emotional while returning to the stage at the Grammys to debut Anyone, a song she wrote as a "a cry for help" just days before a suspected overdose in 2018.
She made a bit of a false start, as a tear rolled down her face, but powered through to her credit.
John Legend, DJ Khaled and more joined forced on-stage to pay a musical tribute to Nipsey Hussle, who was shot dead in Los Angeles last year.
An image of the late rapper was displayed alongside that one of Kobe Bryant as the gospel-powered performance drew to a close.
"Thank you for allowing us to use his legacy and lift it up in song tonight," Legend later declared.
Last but not least, Catalan star Rosalía brought a taste of flamenco to the Grammys stage, safe in the knowledge that her album, El Mal Querer, had bagged best Latin recording earlier in the evening.
That's bound to put a spring in your Spanish step.