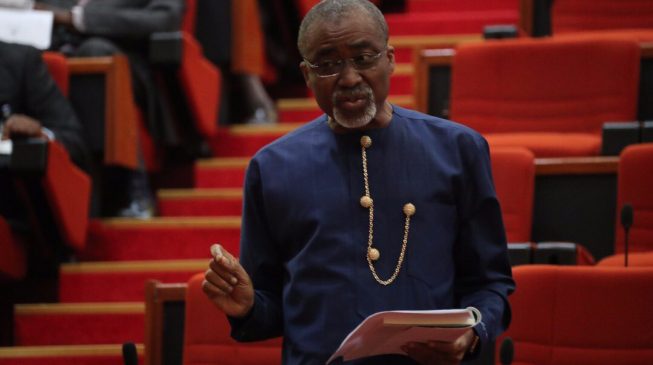 Enyinnaya Abaribe, senate minority leader, has asked President Muhammadu Buhari to resign over the spate of insecurity in the country.
The minority leader said this in reaction to a statement credited to the president where expressed surprise over the country’s insecurity.
Abaribe, while contributing to a debate on a motion the country’s insecurity, said those in charge of the country’s security would rather rely on propaganda than do their jobs.
“Mr president was expressing surprise but in according to our rules order 53 (13) I will not go into that but I can only say in pidgin English ‘this surprise, surprise me’,” he said.
“You have told us that in this solemn day in discussing this matter that we may not at any point be partisan, I want to say Mr president if you didn’t insist that we will not be partisan I’d have called out the presidential spokesman, Femi Adesina, who when the CAN leaders complained about the killings of a priest, he turned around and said CAN was acting like a political party.
“Boko Haram has been defeated, Nigeria is now safer, everything that was being done to make sure that the hard work that was supposed to be done in securing Nigeria was not done because certain people did not do their work but preferred to cover the eyes of Nigerians with propaganda and trying to find all these excuses for non-performance have now come to state us in the face.
“Mr president, Nigeria did not elect the IGP, we did not elect the chief of staff, we did not elect the joint-chiefs or national security adviser, we elected the government of APC in 2015 and re-elected them in 2019. The reason we re-elected them is that they continued to tell us that they had the key to security.
“When you want to deal with a matter, you go to the head so we will go to government and ask this government to resign because they can no longer do anything.”
At this point Senate President Ahmad Lawan interrupted his submission and said Nigerians re-elected the All Progressives Congress (APC) in 2019 because they “saw improvement in their lives”.
“I don’t want to be partisan and I advice against hate speech,” Lawan said.
Culled from The Cable, But Abaribe in concluding his speech on the issue, said: “That government even said if we don’t perform stone us, we are going with the stones to stone them now.”