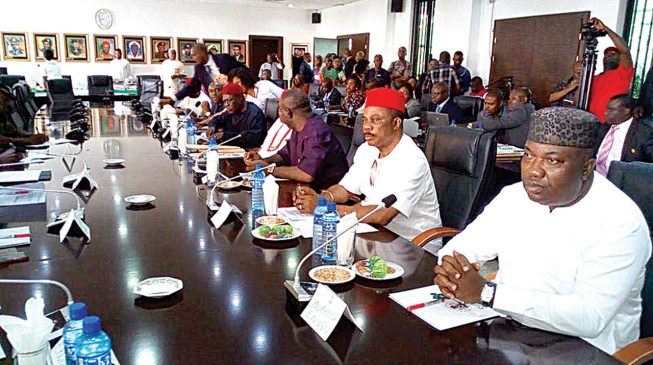 David Umahi, chairman of the south-east governors forum, says the region has formed its regional security outfit to protect lives and properties.
Culled from TheCable, this is coming less than a month after governors in the south-west launched Amotekun, a regional security outfit.
Speaking while hosting Lasisi Adegboye, general officer commanding 82 division of the Nigerian army, in Abakaliki, the state capital, the governor said the forum has written to the federal government on the outfit.
“Every region has their own peculiarities and we have formed our own joint security task force and we have written to the federal government and we are putting things together because we had a joint meeting with all the service chiefs and the then GOC,” Umahi said.
“So, we discussed and agreed on what we need to do to continue to give safety to our people in the south-east.
“No one will say that he will not be part of joint security because when people are kidnapped for example in Anambra State, they could be found in Ebonyi.
“So, we need that synergy to work together to give protection to everybody and here in Ebonyi, we are among the first in the federation to start our law on internal security and that is the Neighbourhood Watch and they have fantastically done very well.
“I am happy that the police, the army, the SSS, they are not ashamed to proclaim that our Neighbourhood Security Watch has done very well. And so, we can say that we are the safest state in the country and there is no joke about that.”
Umahi did not disclose the name of the outfit. Stanley Emegha, a commissioner in Ebonyi, had earlier said Amotekun was copied from the state.
Last week, the federal government reached an agreement with south-west governors on a legal framework for Amotekun.