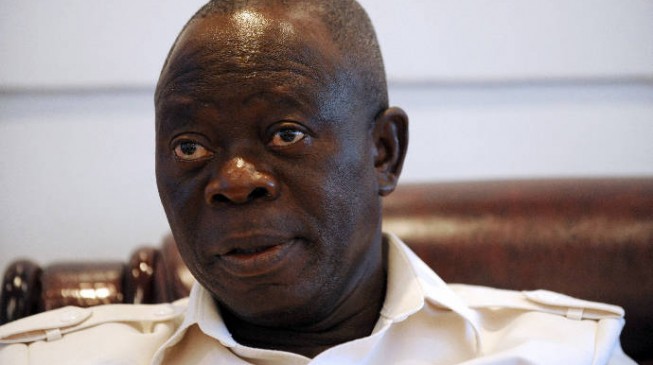 Adams Oshiomhole, national chairman of the All Progressives Congress (APC), says the Peoples Democratic Party (PDP) is behind the rumours that President Muhammadu Buhari wants another term.
TheCable is reporting that Oshiomhole said this on Thursday while speaking with reporters after meeting with Buhari at the state house.
In his New Year message, the president insisted that he will not seek a third term in office. This irked the opposition party and it said Buhari and his party will have no option but to leave power in 2023.
But Oshiomhole said the president needed to reassure Nigerians that he would not seek a third term in office because the opposition party planted the propaganda.
“I am surprised to see that there are people who begin to wonder why should the President reassure Nigerians that he is not going to do third term in office… third term was planted by PDP,” the chairman said.
“It is still in the sub-consciousness of most Nigerians that the first (sic) Nigerian president tried to do third term, emptied the treasury to bribe members of the national assembly and since that president left, thanks to the national assembly, no other next president has done eight years in office.
“You can recall that President Yar’Adua unfortunately has since joined his ancestors, and President Jonathan did six years and so by the special grace of God, this President (Buhari) whom we pray will do his eight years complete in line with the provision of the constitution.
“And because there is a level of idleness within a section of the political class people can sponsor all kinds of publications and to give doubt whether or not the President is planning to stay longer.
“And I think it is his decision that at every interval he needs to remind Nigerians that he is not about to do what a PDP President did. For me it is necessary and in any case it costs us nothing to reassure us that ‘I am leaving’.’’