PDP BoT chairman: My life in danger for not endorsing Atiku for 2023 election 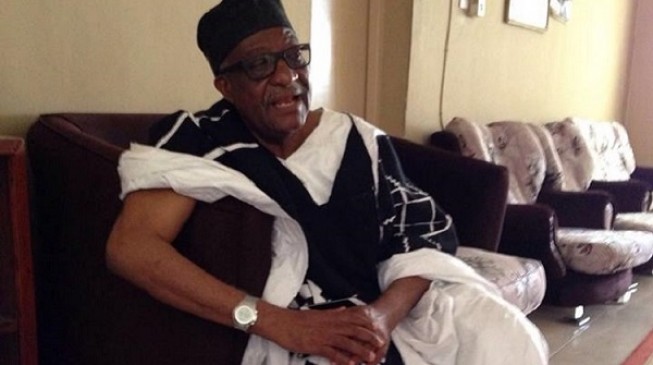 Walid Jibrin, chairman of the board of trustees (BoT) of the Peoples Democratic Party (PDP), says there are threats to his life for not endorsing Atiku Abubakar as the party’s presidential candidate in 2023.
Jibrin announced last week that the opposition party would soon reveal plans for choosing its presidential candidate in the 2023 general election.
According to him, the candidate could emerge from any zone in the country.
But speaking to journalists on Thursday in Kaduna, Jibrin said he received calls from some people threatening his life for not saying the party’s presidential ticket would be zoned to the north-east.
Culled from TheCable, he said he was tagged a traitor for failing to declare Atiku, former vice-president, as his party’s preferred candidate.
“I have received calls from some people threatening my life over my coming out not to mention that the presidency of this country be zoned to the north-east,” he said.
“They were saying that I am a traitor that I should have come out to say that it is only Atiku Abubakar because I said that Atiku was already overthrown by the supreme court.
“They said for that I should say Atiku is the man that I want.”
He said he could not single-handed declare anyone as a presidential candidate of the party because it is the duty of stakeholders to select a candidate.
He said some people are rooting for the ticket to be zoned to the south, saying, “If the Igbos ask me how do I explain to them?”
“I am a leader, I have to make a lots of consultations with National Working Committee, our Governors, then the NEC had to take decision and they should not forget the party has a constitution and a guideline which says there must be primary for whoever wants to contest,” he said.
“About three people went to Wadata Plaza (the party secretariat in Abuja) and demanded to see Munir Yerima.
“When they were there, Yerima rang me saying where I am and I said I am in Kaduna, then he said some people want to talk to me and I said let me talk to them on phone, he said they are intermediary between me and some party people.
“They said I have gone astray and if I don’t recant they would arrange bandits to deal with me wherever I go.
“So I told the man to go and do whatever he wants to do that Iam equal to the task. Then I realise its only a demonstration but they may be planning to assassinate me.”
He also said he has informed the security agencies and demanded protection from them.
“I am a very religious person who cannot even kill a rat or even an ant, yet people are trying to harass me, to assassinate me. I want the police to give me protection and stop this harassment,” he said.
“They said the people are from Kano, Sokoto, Adamawa, Kaduna, Zamfara, Kebbi and Jigawa states. It is  a gang from these Northern states who are planning against me. Let’s see if the security agencies would allow this to happen. I would do all expected of me, I am not shaken.
“Soon NWC would convene a NEC meeting and convention to ratify the arrangements.
“There are people agitating for the Southwest, so we have to bring people together to agree on what people want, so they should leave me alone.”