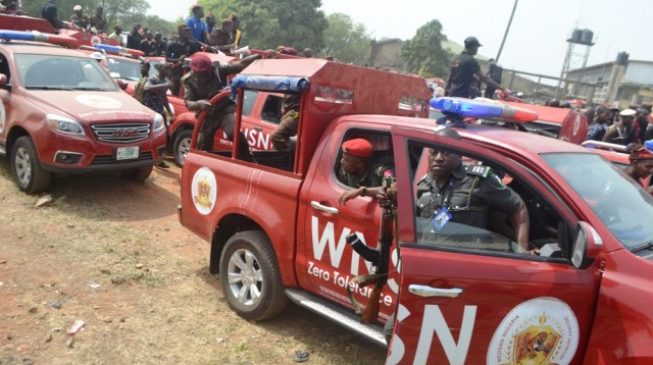 The Muslim Rights Concern (MURIC) says it is now seeing positive signals in the Western Nigeria Security Network code-named Amotekun, according to TheCable.
The group had accused governors of the south-west of recruiting only Christians into Amotekun which it had described as a militia.
MURIC also demanded rebranding of the initiative, saying Amotekun has its origin in the Bible.
The comment had sparked criticism, with a group known as Coalition of Progressive Yoruba Islamic Groups (COPYIG) describing Ishaq Akintola, MURIC director, as a big threat to southern Nigeria.
But in a statement on Thursday, Akintola said Muslims can now seek recruitment into Amotekun as the group had found out that Muslims are among the management team.
“There are positive signals emerging from the Amotekun camp. We have seen that the initial haste to form a regional security unit has been reduced. They are sitting down to map out strategies,” the statement read.
“At the same time, they are putting together a legal framework to legalise the initiative. These are good steps and they were part of the areas of our initial concern.
“Among the positive signals reaching us from the Amotekun camp is the unofficial but reliable information that there are Muslims among the 7-man management team in one of the south-west states. The government of the state of Osun has also declared that the operation is not designed to sideline Muslims. These revelations have informed our current stand on the issue.
“What we need to stress is the need for the exercise to be fair, transparent and devoid of religious bias and ethnic witch-hunting. Muslims will join the security network once there is assurance of fairness and transparency. We therefore call on Muslim youths in the region to start warming up for the recruitment exercise. They should collect forms, fill, submit and wait for further instructions. However, we demand transparency in the recruitment exercise. This can best be done by publishing lists of all fresh recruitment from time to time.
“Besides, joining the outfit will enhance economic empowerment. We therefore urge Muslims in the region not to boycott the security outfit. Muslims should not allow other groups to monopolise it.”