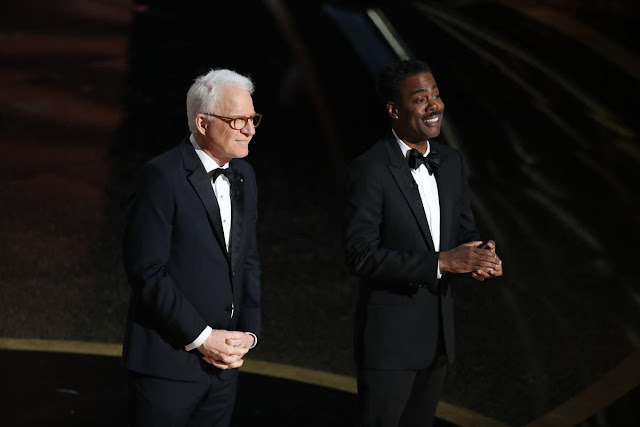 Without a host for a second year, the ceremony offered a grab bag of emotional moments and head-scratching choices.

The Oscars are now an ensemble production.

Last year, after the fiasco of Kevin Hart’s dropping out as host after a backlash against his history of homophobic jokes, the Oscars went stag to its own party. The broadcast was brisk and entertaining, the ratings for the hostless event rose and the awards show decided to leave the post vacant.

This can work, as it did last year, especially with clever set pieces and some awards-magic serendipity. But one thing a host can do is give the broadcast a shape and a voice when nothing else provides them.

And this year’s show seemed to feel the vacuum more, turning out a grab bag of emotional high moments and perplexing uses of time.

Culled from The New York Times, the hostless show opened with Janelle Monáe donning a Mister Rogers cardigan and belting out a medley with backup dancers and lyrics that rhymed “Parasites” and “Dolemites,” followed by a quick, hit-and-miss joint monologue by former hosts Steve Martin and Chris Rock. (“This is such an incredible demotion!” Martin marveled.)

Ditching a host can help the show run on time (this one did not, and not only because of Joaquin Phoenix’s extended argument for veganism). It can leave room for unscripted awards moments. But it loses one of the functions of the awards show host in recent years: to be the elephant-in-the-room pointer, the joker, lowercase, who acknowledges the industry’s failures and embarrassments.

In this case, the Oscars’ most noted offscreen controversy — the glaring whiteness and maleness of many of the major categories and movies — didn’t get quite the airing an extended monologue might have delivered.

The collective did get in a few shots. Rock jibed that Cynthia Erivo, nominated for playing Harriet Tubman, must have hidden all the black nominees, while Monáe said, “We celebrate all the women who directed phenomenal films” (something the best director nominations pointedly didn’t).

This anarchist collective of a ceremony ended up being a sort of anthology of mini-shows, hosted by a string of presenters. Maya Rudolph and Kristen Wiig won Best Audition for a Future Awards Show, nailing a tight a cappella duet medley themed to the best costume design category. James Corden and Rebel Wilson, in costume from “Cats,” spoofed the uncanny-valley horror of that movie: “Nobody more than us understands the importance of good visual effects.”

There was also a string of questionable choices, starting with a bizarre Russian-doll approach in which several of the presenters were introduced by their own presenters. (The show did recognize that some stars, like the musical guest Elton John, needed no introduction.) There was, for some reason, a musical recap of the program halfway through, rapped by Utkarsh Ambudkar.

It may have worked in the room, and in the living rooms of viewers who still have the song on their workout playlist. But energizing the show with nostalgia for a 2002 soundtrack feels a little passive-aggressive toward the movies of 2019.

The ceremony was most effective when it simply got out of the way of its stars’ shine. Erivo burned down the house with a performance of “Stand Up,” from “Harriet” (for which she was also nominated as an actress). There was a meltingly tender Hollywood family moment when Laura Dern shared her first Oscar, for supporting actress in “Marriage Story,” with “my acting heroes, my legends, Diane Ladd and Bruce Dern.” And last year’s best actress, Olivia Colman, shared a side effect of winning a statuette: “Last year was the best night of my husband’s life.”

At its absolute best, this Oscars succeeded with what you can’t script: great artists being recognized, and recognizing others. The room exploded for the surprise best-picture win for “Parasite,” the class-conscious film from director Bong Joon Ho.

When Bong collected the best director award earlier in the evening, he saluted Martin Scorsese and the other nominees in the category, saying through a translator: “I would like to get a Texas chain saw, split the Oscar trophy into five and share it with all of you.”

Then he switched to English to sign off: “Thank you. I will drink until next morning.” A sentiment that, at the end of a long and formless awards show, plenty of us can also share.