Amaechi: I’m not afraid to work with Chinese… coronavirus not killer disease 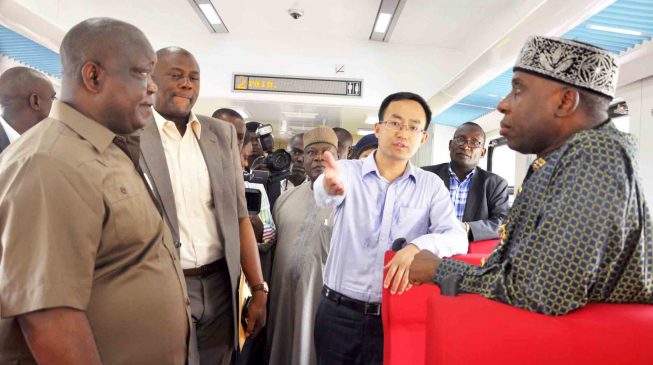 Rotimi Amaechi, minister of transportation, says he is not afraid of mingling with the Chinese in the course of work because coronavirus is not a killer disease.
Amaechi spoke on Monday when he featured on Sunrise Daily, a programme on Channels Television.
Coronavirus first broke out in Wuhan, capital of Hubei province in China, and has killed over 300 people in the Asian country.
Last week, the Philippines became the first country to record death from the virus outside China.
The UK also confirmed two cases of the disease.
But Ameachi said he is not afraid of contracting the disease because those he works with have not travelled out of Nigeria since the outbreak.
Asked if he was not scared for his life, Amaechi asked: “Didn’t you see me …is it last week or two weeks ago with the chairman of CCECC on site at the Lagos-Ibdan railway?
“No, for two reasons: I hear that the coronavirus is not a killer virus. It is not as deadly as SARS, everybody was just running away. Again, I am not saying everybody should go and get coronavirus.
“The main reason I am still working with them despite the fact that I am compelled to do that, is the fact that those who are here that we are working with now didn’t travel, so, obviously, they couldn’t have acquired Coronavirus. Those who travelled and are back are quarantined and they will be there for 18-21 days.”
He said the government is putting measures in place to contain the disease if it spreads to Nigeria.
“The government is not irresponsible. Do you know how many people we are? Almost 200 million persons, so, government will not be that irresponsible to lose 200 million persons,” he said.
Culled from TheCable, the minister also said his interactions with the Chinese should reassure people that there is no cause for alarm.
He added that he, too, does not want to die because he has a family to take care of.
“It is going to be disastrous if such a thing gets here so government is putting up measures,” he said.
“The fact that I talk with them, meet with them, should reassure you. I don’t want to die. I have children and I have a wife.
Last Friday, the World Health Organisation (WHO) declared a global emergency on the disease.
According to WHO, 7,843 people have been quarantined in China while 68 cases have been reported around the world.
Cases of the disease have been confirmed in Australia, Cambodia, Canada, France, Germany, Japan, Malaysia, Nepal, Singapore, South Korea, Sri Lanka, Taiwan, Thailand, US and Vietnam.