Amnesty: Soldiers razed Yobe, Borno villages — and claimed it was a rescue operation 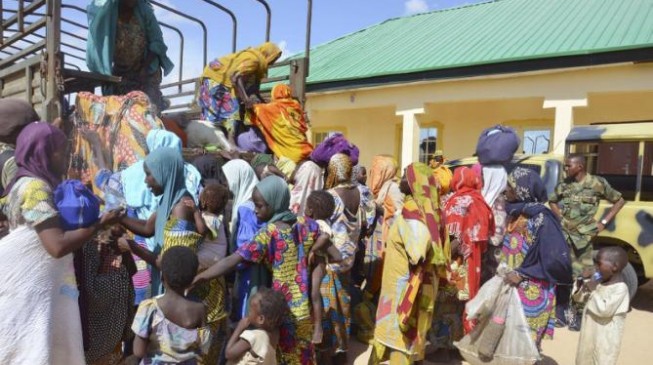 Soldiers of the Nigerian army burnt down three villages in Borno and Yobe states as a war tactic while battling Boko Haram insurgents, Amnesty International (AI) says.
In a new report released on Friday, a copy of which was sent to TheCable, AI said soldiers razed Bukarti, Matiri and Ngariri villages — all along the stretch of Maiduguri-Damaturu road — in early January, and claimed the occupants were rescued from Boko Haram.
The rights watchdog said while most of the occupants were transferred to an internally displaced persons (IDPs) camp in Maiduguri, capital of Borno, some of the men were illegally detained and ill-treated for almost a month.
Sagir Musa, army spokesman, did not immediately respond to TheCable’s enquiries for comment on the incident, which the army described as a rescue operation.
Culled from TheCable, the alleged assault is the latest of the numerous abuses which AI has accused the Nigerian military of in the war against Boko Haram which has lasted over a decade in the north-east.
The organisation said while about 12 affected villagers narrated the incidents which they said happened on January 3 and 4, satellite data analysis confirmed that most houses in the villages were indeed razed.
“These brazen acts of razing entire villages, deliberately destroying civilian homes and forcibly displacing their inhabitants with no imperative military grounds, should be investigated as possible war crimes,” Osai Ojigho, AI director in Nigeria, said in the report.
“They repeat a longstanding pattern of the Nigerian military meting out brutal tactics against the civilian population. Forces allegedly responsible for such violations must be suspended immediately and brought to justice.”
‘WE LOST EVERYTHING’
Residents from Bukarti were quoted as describing “scores of Nigerian soldiers arriving during the late morning of Friday 3 January”
“They said soldiers went house to house and to surrounding farmland, forcing everyone to gather under a tree and by a graveyard between Bukarti and the main road. Soldiers also rounded up people from neighbouring Matiri and brought them to the same area,” the report read.
“Around 3 pm on 3 January, soldiers demanded everyone walk to the main road, where the villagers were forced to board large trucks. Witnesses said that, as they were loaded into the trucks, some of the soldiers returned to Bukarti. The witnesses then saw their village burning.”
“We saw our houses go into flames,” recalled a woman, around 70 years old, from Bukarti. “We all started crying.”
The report added that the villagers Bukarti and Matiri, numbering over 400, were transferred to an unnamed IDP camp near Maiduguri, while a repeat of the incident played out in Ngariri, the next day.
AI quoted those affected as saying they “we lost everything” as they could not bring their belongings along with them to the IDP camp.
“Everything we harvested was destroyed, and some of our animals died,” a farmer in his 60s said. “I had a year [of harvest] stored – it’s what I would’ve sold to buy clothes and other things for my family.”
Another in his 30s said: “Everything was burned, even our food – it could feed [my family] for two years. Our clothes, our food, our crops, our kettles. Even the trolley we used for getting water. Only the metal dishes are there, but everything else is burned.”
Editor’s note: The photo in this report is only for illustrative purpose.