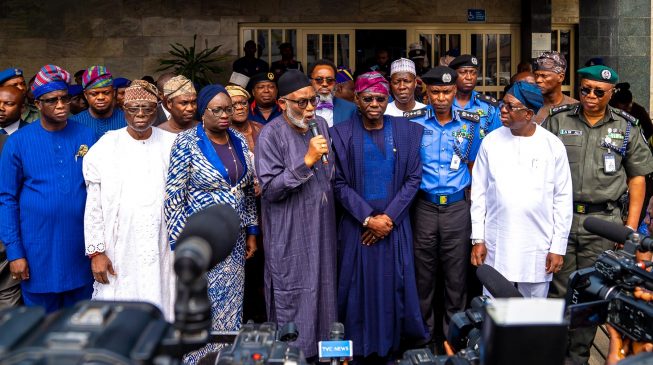 Governors of south-west states have adopted Amotekun, a joint security outfit, as a state effort and not a regional initiative.
The governors had launched Amotekun on January 9, as a regional security initiative.
But Abubakar Malami, attorney-general of the federation, had opposed the move, saying security remains the exclusive preserve of the federal government.
Culled from TheCable, the governors later reached an agreement with the federal government to map out a legal framework for the outfit.
On Thursday, Mohammed Adamu, the inspector-general of police, and the governors agreed on a framework to operate Amotekun as a state-based initiative and not a regional outfit as originally declared.
At the end of the meeting which held in Lagos, Rotimi Akeredolu, governor of Ondo, said a resolution was reached with the police.
Akeredolu, chairman of the south-west governors forum, said the meeting was of “great importance” to the people of the region, adding there was a fruitful discussion with the IGP.
“In addition, we have spoken and we want everyone to know that, Amotekun was not conceived as a regional police, but a state-based security outfit,” he said.
“We have come out of this meeting happy and we have agreed on the resolution. We have shed lights on dark areas and we are on the same page with the police with respect to these issues.”
Babajide Sanwo-Olu, governor of Lagos, said the meeting was part of the governors’ efforts to champion initiatives and frameworks that continue to provide support and logistics required for effective policing in the region.
In his remarks, the IGP said Amotekun will now operate as a state initiative in collaboration with community policing strategy.
He said every state has an existing security arrangement to fight crime.
“Amotekun is not a regional security outfit. Every state has one form of security arrangement, whether it is vigilante or neighbourhood watch that are working security agencies in the states to fight crime,” he said.
“Amotekun is not different from these initiatives. We have agreed that community policing strategy be infused into the Amotekun structure, so that policing will be initiative of the community members.”
Adamu added that the police would be part of the recruitment, training and deployment of personnel to be assigned for Amotekun operations.
The meeting also ratified community policing model proposed by the IGP, saying the initiative would complement Amotekun and conventional police operations in all local communities.
About a month after Amotekun was launched, south-east governors forum announced the establishment of a regional security outfit.
The Coalition of Northern Groups (CNG) also announced the establishment of a regional security outfit known as “Shege-Ka-Fasa”.