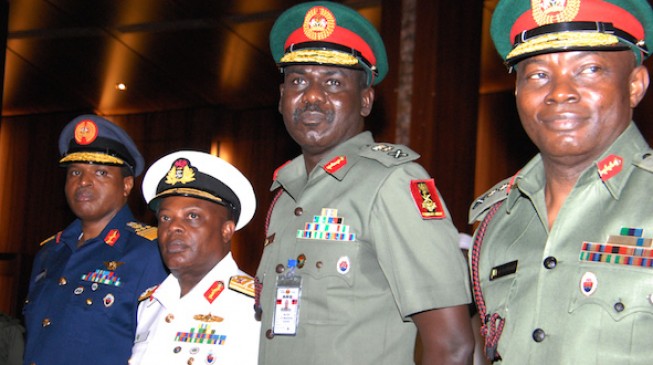 Boss Mustapha, secretary to the government of the federation (SGF), says President Muhammadu Buhari will not sack service chiefs.
The Nation quoted him as saying this while addressing journalists after a book presentation by Samuel Salifu, former general secretary of the Christian Association of Nigeria(CAN), in Abuja on Tuesday.
Mustapha said it is premature to sack the service chiefs because of Nigeria’s growing insecurity.
Culled from TheCable, he said the situation requires “everyone to be on board.”There have been growing insecurity in various parts of the country including armed banditry in the north-west and Boko Haram attacks in the north-east where the insurgents seem to be regaining their might.
As a result of the attacks, many Nigerians and groups asked President Muhammadu Buhari to relieve the service chiefs of their duties and employ “competent” hands.
Both chambers of the national assembly also called for the sack of the security heads if they fail to resign.
Mustapha, however, said what should be the main focus for Nigerians is how to work together to combat the security challenges, and not the sack of service chiefs.
“We are in a very difficult time now. We need everybody to be on board. We need synergy within intelligent community, within the military formations that will help fight this war,” he said.
“When we begin to create cracks and divisions, who will be the beneficiaries? The adversaries are the ones that are going to exploit those deficiencies and further the cause of destabilising the nation.
“At this moment, what we need is for everybody to be on the same page, fight the battle of securing the nation for protecting lives and property and ensuring that every Nigerian has the opportunity to live a prosperous live. I think that should be our main focus.
“You don’t sack people like that. There are processes and I believe that at the opportune time, those processes will be followed. You don’t just wake up and say sack people, it doesn’t happen like that.”
Tukur Buratai, chief of army staff, had also told TheCable relieving the service chiefs of their will not end the nation’s security challenges.