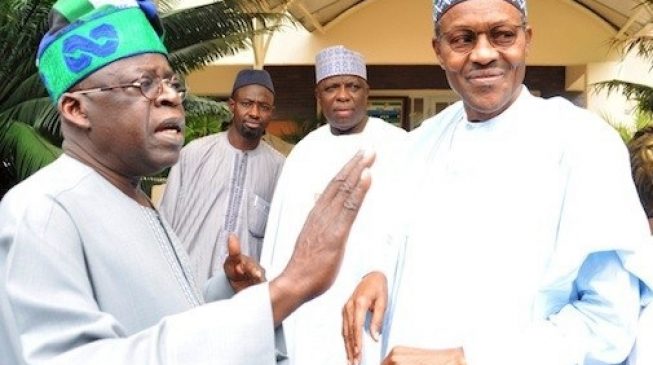 Bola Tinubu, a national leader of the All Progressives Congress (APC), says he is not responsible for a viral quote describing President Muhammadu Buhari as a religious bigot and an agent of destabilisation.
According to the content being shared across social media platforms, Tinubu, a former governor of Lagos, allegedly described Buhari as “an agent of destabilization, ethnic bigot, and religious fanatic” in 2013.
“Muhammadu Buhari is an agent of destabilization, ethnic bigot, and religious fanatic who if given the chance would ensure the disintegration of the country. His ethnocentrism would jeopardize Nigeria’s national unity,” read the quote.
In 2003, Buhari contested the presidential election under the All Nigeria Peoples Party (ANPP) but lost to former President Olusegun Obasanjo of the Peoples Democratic Party (PDP).
At the time, Tinubu, who was seeking a re-election as governor of Lagos, ran under the platform of Alliance for Democracy (AD) and won.
In a statement on Friday, Tunde Rahman, Tinubu’s media adviser, said the quote is fictitious, describing it as “the handiwork of merchants of hate and fake news”.
Culled from TheCable, he said the former governor never made such statement about Buhari, appealing to the public to ignore it.
Rahman challenged those behind it to disclose where Tinubu made the remark.
“This stuff has been going round and circulating as if it’s of a fact. It is not. It’s the handiwork of merchants of hate and fake news. Asiwaju Tinubu could not have said such of then GMB,” the statement read.
“Let’s dissect it: Yes Asiwaju and GMB as he then was were not in the same party in 2003. But they were not on each other’s path to warrant any hard feelings in the first instance. GMB was contesting for the presidency in 2003, Asiwaju was Lagos governor seeking re-election which he got. GMB was contesting against President Obasanjo.
“Truth is Asiwaju would even wish that GMB defeated the dictatorial President Obasanjo who ruled the country on his whims. Against a clear decision of the Supreme Court Obasanjo seized Lagos allocation and did many unthinkable. Asiwaju would not descend so low as to label anyone ethnic bigot or religious fanatic.
“These words are neither of him nor relate to him in any way. The agents of darkness who are bent on sowing seeds of discord at this time the nation is confronting challenges of insecurity and religious extremism should tell us when he uttered those words.
“Where did he speak? Was it a newspaper interview? Was it a public lecture? No source. No attribution. The merchants of fake news just did a fantastic quote to cause mischief and create discord. We should not allow them.”