Galentine’s Day Is Everywhere. Here’s Why

It’s been 10 years since “Parks and Recreation” introduced the Valentine’s Day alternative. Now companies and venues are cashing in on this unofficial holiday. 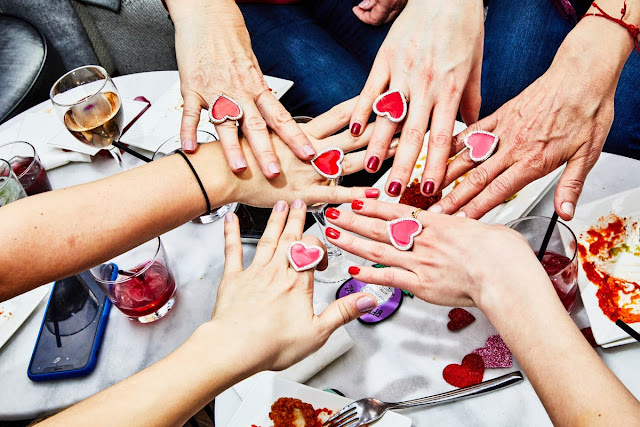 On a mid-February afternoon, dozens of women, mostly in their 20s and 30s, ascended to a hotel rooftop in Manhattan, dressed for brunch in pink blazers, pink tank tops, pink eye shadow, even pink hair. Heart streamers cascaded from the doorway. Sangria flowed freely, the mimosa bar was stocked, and the waffles were limitless.
There was just one noted absence: boys. They weren’t allowed.
This wasn’t a Valentine’s celebration, after all. It was a Galentine’s party for “ladies celebrating ladies.” Feb. 14 is still reserved for romantic relationships. But, if you’re not in one, the week of Feb. 13 is all about sisterhood — and increasingly, as corporations take note of this trend, commercialization.
Culled from The New York Times, Galentine festivities originated on “Parks and Recreation,” the seven-season NBC sitcom that chronicled the relationships between Leslie Knope (played by Amy Poehler) and her local public sector colleagues. In an episode of Season 2 that first aired 10 years ago, Leslie gathers her female pals for brunch and showers them with gifts — hand-crocheted flower pens, mosaic portraits of each guest made from the crushed bottles of their favorite diet soda, and personalized 5,000-word essays of why they’re awesome. “It’s like Lilith Fair, minus the angst,” she said, “plus frittatas.”
Where Valentine’s focuses on romance — a holiday that can feel alienating or exclusionary for some — Galentine’s festivities offer a more welcoming vibe. Over the last decade, fans of the show have been crafting Galentine’s celebrations, pulling some elements from the show and creating some of their own.
At the Monarch Rooftop in Midtown Manhattan, where tickets for the event cost $40, the brunch menu featured the classic essentials, frittatas and waffles — Leslie’s favorite food — but added “avo-cuddle” toast, “bae-gals” and fries “B4 guys.” Some guests exchanged gifts, but dialed down the Leslie-level intensity to sparkly heart rings and hair clips. And although tabletop drinking games were never part of the “Parks and Rec” Galentine’s checklist, the prosecco pong was a fun (albeit boozy) touch.
“I just like to be around girls and have no guys here,” said Tiffany Alves, 25, a student at New York Law School in Manhattan who brought two law school girlfriends along this past Sunday. “I feel like you can take pictures and drink and eat and dance, and they’re not going to judge you.”
But as more women adopt Galentine’s as an annual tradition — undoubtedly helped by the availability of “Parks and Recreation” through streaming — companies are cashing in.
Hallmark now offers Galentine’s trinkets and greeting cards — “Hey lady,” one reads, “How are you so awesome?” Party City sells glittery Galentine’s balloons and banners, along with “fries not guys” paper cups. On Etsy, handmade Galentine’s crafts abound, including cards, balloons, buttons, hair ties and uterus-shaped confetti.
Bars, coffee shops, boutiques and fitness studios are also hosting their own Galentine’s promotions and events.
“It’s sort of impossible in America for anything to enter the culture and then not be commodified, you know?” said Michael Schur, the creator and an executive producer of “Parks and Recreation.” “I wish it weren’t being used the way it’s used sometimes, but I’m happy that it’s being used at all because that means that it struck a chord with people.”
Mr. Schur first noticed the extension of Galentine’s Day years ago, with ads on Twitter and signs around Los Angeles offering customers free Galentine’s margaritas in honor of the unofficial holiday.
“Anytime anything you write sort of penetrates this disparate culture that we’re in and catches on and sort of is echoed back to you, that’s delightful,” he said. “But it also was odd to see it sort of warped a little bit and converted into this thing that’s being used by brands and websites and corporations in order to have a sale on whatever it is they’re hawking. Because obviously, that wasn’t the point of it.”
Mr. Schur, whose other series include “The Office,” “Brooklyn Nine-Nine” and “The Good Place,” hasn’t seen a lot of other details from his shows take hold the way Galentine’s has. “Treat Yo Self,” another “Parks and Rec”-ism, has somewhat entered the public lexicon — and other holidays with sitcom origins, like Festivus of “Seinfeld” fame, are recognizable but no longer widely celebrated.
But Galentine’s seems to have broken through the screen, perhaps because it gives women like Ms. Alves and her friends the chance to dress up and celebrate being together. For a group obsessed with the show, they say it’s “becoming our tradition.”