On trial by day, and the dais by night 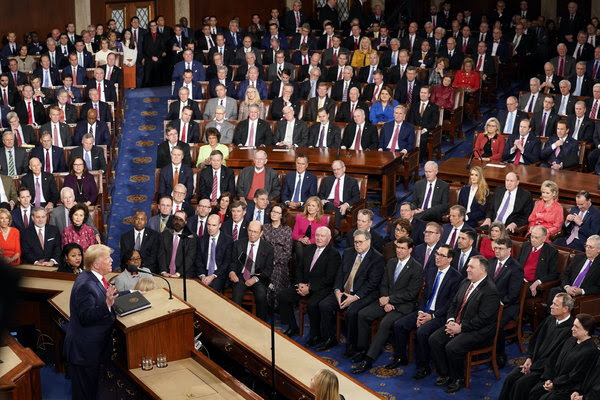 On the eve of a vote that will almost certainly acquit him of impeachment charges, President Trump used a major speech to claim credit for a “great American comeback” and define the coming presidential election as a battle to stop the rise of socialism in the United States. Here’s a roundup of our coverage and six takeaways from the night.
In the annual State of the Union address, Mr. Trump argued against Democratic plans to expand access to health care and praised his own tax cuts and the American drone strike that killed a senior Iranian commander, among other subjects.
The president also sprinkled the evening with dramatic flourishes — an army sergeant surprising his family in the House chamber, for example — that evoked his days as a reality television star.
Quote of note: “In just three short years, we have shattered the mentality of American decline and we have rejected the downsizing of America’s destiny,” Mr. Trump told Congress, speaking in the same House chamber where he was impeached nearly seven weeks ago.
Mutual snubs: In a decidedly chilly exchange, Mr. Trump declined to shake the hand of Speaker Nancy Pelosi, who then introduced him in a perfunctory way that eschewed the more florid language that she and other speakers have used in the past. She later ripped up her copy of his speech.
Notable guest: Juan Guaidó, the Venezuelan opposition leader, sat in Mr. Trump’s guest box. It was America’s most visible show of support yet for Mr. Guaidó, who is fighting to oust his country’s president from power.
This piece is credited to the Wednesday briefing of the New York Times put together by Mike Ives.