Opinions are divided on service chiefs, says Gbaja after meeting with Buhari 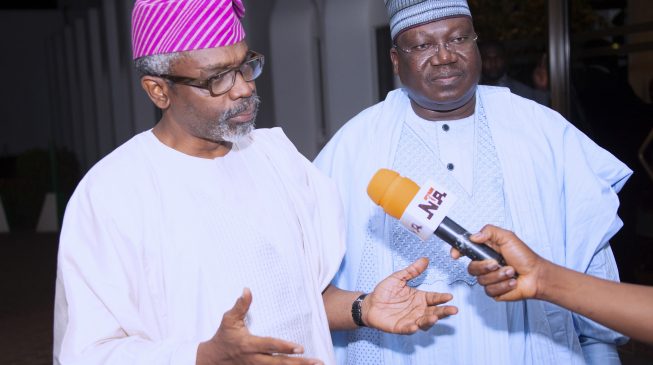 Femi Gbajabiamila, speaker of the house of representatives, says opinions are divided on the continuous stay of service chiefs in office despite rising insecurity.
The speaker said this on Monday after visiting President Muhammadu Buhari alongside Senate President Ahmad Lawan.
Culled from TheCable, Gbajabiamila said during the meeting, the president opened up about the challenges associated with insecurity.
“The question of security is uppermost in his mind and he opened up to us and you must understand that some communications are privileged, but suffice to say that the president is concerned and he intends to do something about our challenges,” Gbajabiamila said.
“Opinions are divided; the generality of the opinion is that the service chiefs should go, that was evident in our debates in the house of representatives and in the senate, bus sometimes you don’t want a knee-jack reaction.
“Many of us identify that something drastic has to be done, there’s also the school of thought that says since we are talking about banditry, kidnapping and murders, what have the armed forces got to do with that, anywhere in the world?
“So, the question then arises that if he changes the service chiefs, does that address the issues of kidnapping and banditry? The army, navy and air force are outfits set up to tackle external aggression. It is the police that is set up for internal security, such as we are all witnessing.
“That’s talking about service chiefs, has the inspector-general of police met up with his responsibilities? The question is if we now narrow it that to the inspector-general to police, many will argue that he has done a very good job and many will argue with you that he’s straight-jacketed, there’s very little he can do in the face of no equipment, no funding and we explained to Mr. President that we have to increase funding, we have to recruit more.”
The speaker said a committee, comprising members of the national assembly and the executive, will be set up to periodically review the security situation in the country.