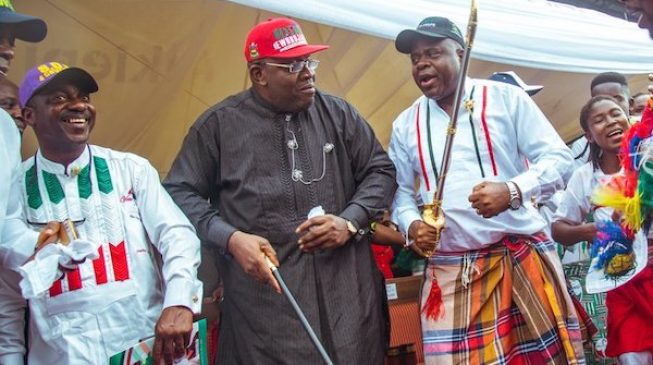 Duoye Diri, candidate of the Peoples Democratic Party (PDP) in the November 16 Bayelsa governorship election, has waved the olive branch to former members of his party who defected to the All Progressives Congress (APC).
Diri, who is expected to be sworn in as governor of the state, made the comment following the supreme court sack of David Lyon, his APC rival.
According to results announced by the Independent National Electoral Commission (INEC), Lyon defeated Diri in the march election.
He had polled 352,552 votes while the PDP candidate secured 143,172 votes, leaving a margin of 209,382.
Culled from TheCable, the PDP and Diri had sought the disqualification of Biobarakuma Degi-Eremienyo, Lyon’s running mate, over alleged falsification of results.
On Thursday, a panel of judges led by Mary Odili affirmed the verdict of a federal high court which disqualified Degi-Eremienyo from the election for “submitting forged credentials to INEC”.
The apex court also said the candidate with the second highest number of votes in the election should be issued a certificate of return.
While addressing reporters on Friday, Diri, who polled the second highest votes, pleaded with PDP members who had left the party to return.
Asked if his invitation to the opposition party meant he would run an inclusive government, Diri replied in the affirmative.
“The members of PDP, who out of one thing or the other got angry and left us to APC, I’m waving the olive branch, please, come back,” Diri said.
“We have to build Bayelsa state together. I’m also calling on my brothers in APC they are Bayelsans, we cannot continue to be in disunity.
“Being in APC does not remove you as my brother of Bayelsa state. Whether you are Nembe, Okpia, Sabama, or Southern Ijaw, that is the region that God has brought us together and so, I am extending my olive branch even to those of my brothers and sisters in APC.”