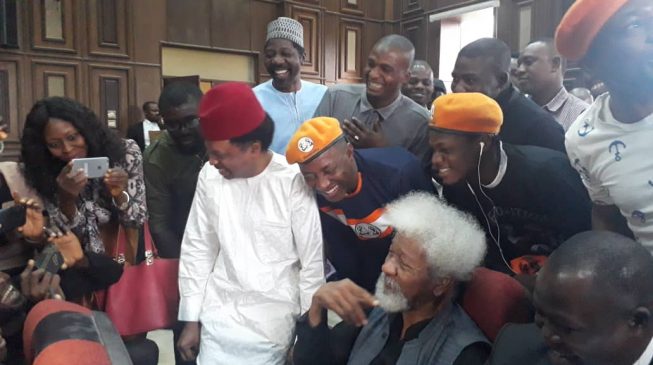 Wole Soyinka, Nobel laureate, and Shehu Sani are at a federal high court in Abuja to witness the trial of Omoyele Sowore, convener of RevolutionNow Movement.
Soyinka arrived about 8:50am, five minutes before Sowore arrived at the court.
Culled from TheCable, Sowore and Olawale Bakare, his co-accused, are standing trial on seven counts of treasonable felony, fraud, cyber-stalking and of insulting the president.
He was arrested by the Department of State Services (DSS) on August 3 ahead of a nationwide protest.
He was released after 124 days in custody, but forcibly rearrested at a federal high court in Abuja — less than 24 hours after his release.
He was eventually released on December 24, 2019.