Widespread Outcry in China Over Death of Coronavirus Doctor


The doctor, Li Wenliang, had been silenced by the police after warning about the new coronavirus that has killed hundreds in China and sickened thousands. 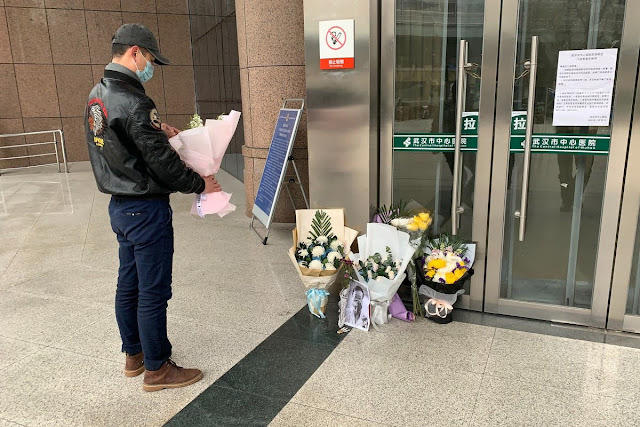 They posted videos of the Les Misérables song “Do You Hear the People Sing.” They invoked article No. 35 of China’s Constitution, which stipulates freedom of speech. They tweeted a phrase from “For Whom the Bell Tolls.”

The Chinese public has staged what amounts to an online revolt after the death of a doctor, Li Wenliang, who tried to warn of a mysterious virus that has since killed hundreds of people in China, infected tens of thousands and forced the government to corral many of the country’s 1.4 billion people.

Since late Thursday, people from different backgrounds, including government officials, prominent business figures and ordinary online users, have posted numerous messages expressing their grief at the doctor’s death and their anger over his silencing by the police after he shared his knowledge about the new coronavirus. It has prompted a nationwide soul-searching under an authoritarian government that allows for little dissent.

“I haven’t seen my WeChat timeline filled with so much forlornness and outrage,” Xu Danei, founder of a social media analytics company, wrote on the messaging platform WeChat.

“Tonight is a monumental moment for our collective conscience,” he wrote in a later post.

Though there are some outspoken dissidents in China, their numbers have dwindled as the Communist Party under the leader Xi Jinping has cracked down repeatedly on lawyers, journalists and businesspeople over the past seven years.

In this highly censored society, it’s rare for ordinary people to make demands and openly express anger toward the government. It’s even more rare for officials and heads of big corporations to show emotions that can be interpreted as discontent with the state.

After speculation of Dr. Li’s death began swirling online Thursday evening, the Communist Party’s propaganda machine went into full gear, trying to control the message. But it didn’t seem as effective as it had in the past.

Culled from The New York Times, The outpouring of messages online from sad, infuriated and grieving people was too much for the censors. The government even seemed to recognize the magnitude of the country’s emotion, dispatching a team to investigate what it called “issues related to Dr. Li Wenliang that were reported by the public,” though without specifics.

For many people in China, the doctor’s death shook loose pent-up anger and frustration at how the government mishandled the situation by not sharing information earlier and by silencing whistle-blowers. It also seemed, to those online, that the government hadn’t learned lessons from previous crises, continuing to quash online criticism and investigative reports that provide vital information.

Some users of Weibo, China’s Twitter-like social media platform, are saying the doctor’s death resonated because he was an ordinary person who was forced to admit to wrongdoing for doing the right thing.

Dr. Li was reprimanded by the police after he shared concerns about the virus in a social messaging app with medical school classmates on Dec. 30.

Three days later, the police compelled him to sign a statement that his warning constituted “illegal behavior.”

The doctor eventually went public with his experiences and gave interviews to help the public better understand the unfolding epidemic. (The New York Times interviewed Dr. Li days before his death.)

“He didn’t want to become a hero, but for those of us in 2020, he had reached the upper limit of what we can imagine a hero would do,” one Weibo post read. The post is one of many that users say they wrote out of shame and guilt for not standing up to an authoritarian government, as Dr. Li did.

Many people posted a variation of a quote: “He who holds the firewood for the masses is the one who freezes to death in wind and snow.” The original version of the saying came from the Chinese writer Murong Xuecun about seven years ago when he and some friends were raising money for the families of political prisoners.

It was written as a reminder to people that it was in their interest to support those who dared to stand up to authority. Many of those people had frozen to death, figuratively speaking, as fewer people were willing to publicly support these dissenting figures.

The atmosphere was very different on Thursday evening. As confusion mounted about Dr. Li’s fate, people accused the authorities of trying to delay announcing his death.

The grief was so widespread that it appeared in unlikely corners.

“Refusing to listen to your ‘whistling,’ your country has stopped ticking, and your heart has stopped beating,” Hong Bing, the Shanghai bureau chief of the Communist Party’s official newspaper, People’s Daily, wrote on her timeline on WeChat, an instant-messaging platform. “How big a price do we have to pay to make you and your whistling sound louder, to reach every corner of the East?”

Both the Chinese- and English-language Twitter accounts of People’s Daily tweeted that Dr. Li’s death had prompted “national grief.” Both accounts deleted those messages before replacing them with more neutral, official-sounding posts.

The Weibo account of Shandong Province’s law enforcement body posted a portrait of Dr. Li with two sentences that have been circulating online: “Heroes don’t fall from the sky. They’re just ordinary people who stepped forward.”

Wang Gaofei, the chief executive of Weibo, which carries out many of the orders passed down from China’s censors, pondered what lessons China should learn from Dr. Li’s death.

“We should be more tolerant of people who post ‘untruthful information’ that aren’t malicious,” he said in a post. “If we’re only allowed to speak what we can guarantee is fact, we’re going to pay prices.”

Even the official WeChat account of a quantum physics blog wrote a post headlined “Li Wenliang, you only went to the ‘parallel universe.’”

On social media, many people urged the government to make Dr. Li a martyr and hold a state funeral attended by the nation’s leaders.

For some, it was a lesson about the importance of free speech, one the government didn’t understand. Beijing has increased its censorship over investigative reports that have exposed missteps by officials who underestimated and played down the threat from the coronavirus. China’s top leaders stepped up efforts to make the news coverage focus more on positive developments in the battle against the epidemic.

The hashtag #wewantfreedomofspeech# was created on Weibo at 2 a.m. on Friday and had over two million views and over 5,500 posts by 7 a.m. It was deleted by censors, along with related topics, such as ones saying the Wuhan government owed Dr. Li an apology.

“I love my country deeply,” read one post under that topic. “But I don’t like the current system and the ruling style of my country. It covered my eyes, my ears and my mouth.”

The country’s high-powered executives have been less blunt, but have echoed the same sentiments online.

“It’s time to reflect on the deeply rooted, stability-trumps-everything thinking that’s hurt everyone,” Wang Ran, chairman of the investment bank CEC Capital, wrote on Weibo. “We all want stability,” he asked. “Will you be more stable if you cover the others’ mouths while walking on a tightrope?

Gao Xiaosong, an Alibaba executive, posted on his Weibo account that he hoped China would enact a whistle-blower protection act, seemingly in reference to the American law, so that more people could speak out. “R.I.P. Our hero. Thank you,” he wrote of Dr. Li.

Some proposed that people in China sound their car horns at 9:30 p.m. on Friday in the doctor’s memory. While it’s not clear whether that happened, many around the country blew whistles at 9 p.m. and posted photos of candles on their social media timelines 30 minutes later.

They have also urged the simultaneous posting of a hashtag of the two questions the police asked Dr. Li to answer in a statement: “Can you stop your illegal behavior?” and “Do you understand you’ll be punished if you don’t stop such behavior?”

Dr. Li had been forced to respond in writing: “I can” and “I understand” — putting his red thumbprint on top of them.

It’s too early to tell whether the online anger and frustration will amount to much. There was palpable public outrage in a few past tragedies, including a 2008 earthquake in Sichuan Province and a train accident in 2011. But it faded in those instances.

Some people in China are more hopeful this time. In those past tragedies, many people could stay out of them, said Hou Zhihui, a commentator who has been detained twice for his online speeches. “But this time, nobody can stay out of it. It’s impossible.”